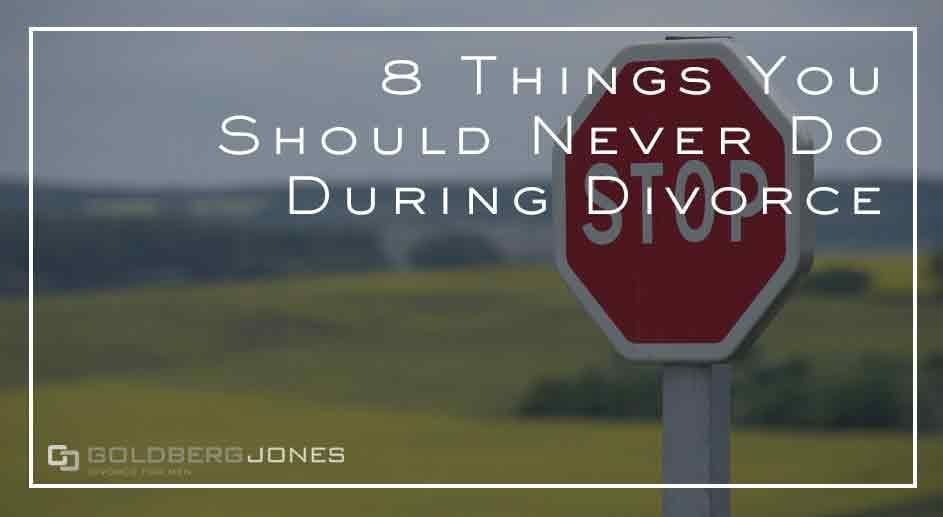 In divorce, emotions run high. You may feel the temptation to lash out at your soon-to-be ex and exact a bit of retribution. Most experienced lawyers, however, will tell you that’s a bad idea. There are certain things you should never do during divorce.

No matter how angry you may feel, it’s important to keep your cool. That’s often easier said than done, but maintaining an even keel is the best way to make sure things go a smooth as possible and ensure an optimal outcome.

With that in mind, here is a collection of things you should never do during divorce. Some will damage your case, while others may hurt you or people you care about.

What Not To Do

1. Never Act Out Of Spite

You may feel the impulse to use the court system to get back at your spouse. In most cases, you’ve probably been through some tough times. Anger often figures into ending a marriage. Maybe you want someone to pay. In the end, that’s more likely to do more harm than good. It can cost you a great deal, in money, time, and stress. Focus on starting your new life instead of lingering on past wounds.

If you have children, remember, divorce impacts them as well. It’s important to remain a part of your child’s life, even as you go through a turbulent time in yours. Take advantage of the time you get to spend with them and let them know you care about them. Continue to support them both financially and emotionally. Even just being around can help ease their minds in a traumatic period of their lives.

3. Never Use Kids As Pawns

This is a tough time for kids, and it’s even worse when parents use them as pawns. One thing you should never do during divorce is make your kids the center of a tug-of-war. Don’t try to turn them against your spouse or use them as weapons to hurt your ex. That doesn’t do anyone any favors and only increases the likelihood of damaging your own relationship with your kids.

4. Never Give In To Anger

It’s not always easy, but it’s important to keep your emotions in check as much as possible. During this tumultuous time and people tend to overreact or act without thinking. You’ll feel the results of your divorce for years, making rash decisions and not considering the impact can cause lasting damage. Maintaining composure now can pay big dividends in the future.

5. Never Expect To Get Everything

You’re not going to win every battle. That’s just a fact. People often enter into the divorce process with lofty expectations only to have them dashed. When it comes to the division of property, the general goal is to split assets and debts in a way that is fair and equitable. Ideally, the court wants both parties to maintain a lifestyle similar to that which they enjoyed while married.

It’s vital to choose your battles. Too many couples waste too much time, money, and energy fighting over every last detail, no matter how minor. Before you wage war, consider what you truly want and need out of your divorce moving forward and expend your efforts there. Do you want the house, the car, custody of the kids? Do you really want to spend hours of your life and hundreds of dollars deciding who gets the painting of the dogs playing poker?

One thing you should never do during divorce is try to hide assets from the other side. People try to protect their finances by moving assets out of their names or concealing resources. But no matter how clever you think you are, you’re likely going to be found out. Most experienced attorneys have seen just about everything. This not only ruins your credibility, it can damage your divorce case.

You probably know someone who has gone through a divorce. Most people do. But it’s important not to compare your case to that of your cousin or coworker. Every case is different. Spouses have different goals and interests. Laws vary a great deal from one state to the next and impact everything from child custody to splitting assets.

Your case is unique to your situation. It’s fine to take advice, but take it with a grain of salt.

There are tons of other dos and don’ts. Ask any family law attorney and they’ll likely have their own list of things you should never do during divorce. No two cases ever play out exactly the same. They’re as different as the individuals involved.

More than anything, it’s important to approach ending a marriage with an even temper and rational outlook. The results will echo throughout your life for years to come. Make sure you give every decision the weight and attention it requires.