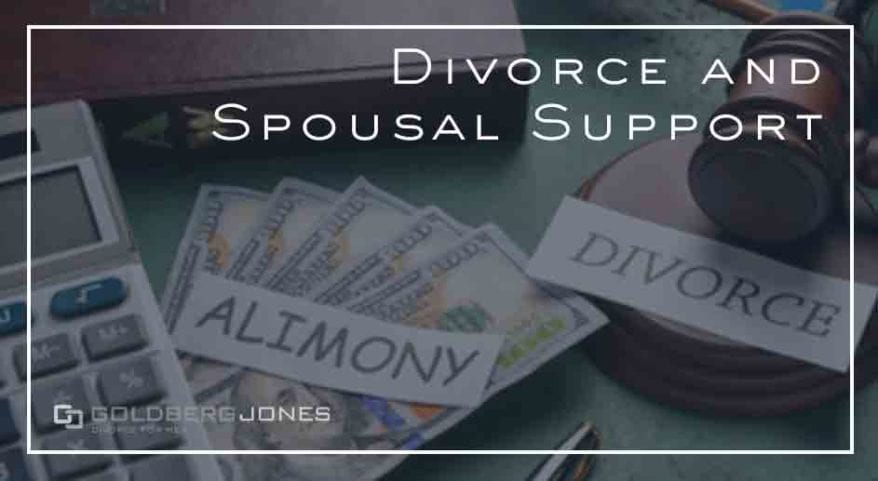 At the same time, the recipient will no longer have to pay taxes on this amount. Before Jan 1st, 2019, the opposite was true.  Some estimate spousal support payments could drop as much as 10% to 15%.

However, this large change in spousal support taxation policy will not apply to existing divorce orders (those entered prior to January 1, 2019). These orders, so long as not later modified, will be grandfathered in at the prior tax policy.

It is important to note that any Modification after December 31, 2018, to a pre-existing court order re spousal support will likely be subject to the new laws.

How Does Spousal Support Work In California?

Ending a marriage doesn’t come cheap and divorce comes with a laundry list of expenses. You have to pay court costs, charges for filing paperwork and responding to motions, and likely attorney’s fees.

Afterward, you may have to shell out to set up a new home base, changes in your filing status impact your tax situation, and if there are kids, you may wind up on the hook for child support. And in some cases, the court may also order you to pay spousal support.

When Spousal Support May Be Ordered

Spousal support usually comes into play after the division of property. If spousal support factors into your settlement, it will likely be one of your biggest post-divorce expenditures. California is a community property state, which means they view all assets earned or acquired during the course of the marriage as belonging equally to both spouses.

Instead, courts divide property in a fair and equitable manner. The general idea is for each party to depart on relatively equal footing.

Once you deal with the division of debts and property, spousal support may come into play. This is most common when one spouse has additional needs, or there’s an imbalance in the settlement.

But if each spouse can maintain a lifestyle similar to during the marriage, it may not show up. When a substantial gap in earning potential exists, health issues impact employment, or other factors arise, it may.

Types Of Spousal Support In California

The specifics of spousal support vary greatly from one state to the next. Most states have multiple forms, and California is no different. Two kinds of spousal support exist in the Golden State. Depending on the circumstances, the court may award temporary or permanent support.

As the name implies, temporary spousal support provides financial support for a limited duration. The “temporary” designation comes into play as these payments are designed to ensure stability to the lower-earning spouse during the divorce process.

Once the marriage is dissolved and permanent spousal support is awarded, these payments stop.

While temporary payments sustain one spouse during a divorce, permanent spousal support does the same on a long-term basis after the marriage officially ends. The “permanent” label is something of a misnomer. Such awards rarely continue indefinitely. How long depends on a number of factors, like the level of need, the length of the marriage, and more.

Though it isn’t a hard-and-fast rule, for marriages of under ten years, permanent support typically lasts no more than half the length of the union.

For example, if your marriage lasted six years, you can reasonably expect to pay—or receive—spousal support for three. In the cases of many shorter marriages, the court may not award any support.

If your marriage lasted longer than 10 years, things become more permanent. The court must order indefinite support until one party dies, one party marries, or the court rules otherwise. Only by reaching an out-of-court settlement can you avoid this.

How Are Payments Calculated In California?

Many factors go into determining the duration and amount of spousal support payments in California. If payments are necessary, and you and your spouse can’t agree on terms, the court will make a decision.

As the goal is for each party to maintain the lifestyle they had during the marriage, that’s the general target. One of the big components, earning potential plays a substantial role in determining spousal support. The court considers:

Other scenarios may also figure into the decision. For example, if one party worked full time to put the other through school. The ability to work without it interfering with raising children, age and health concerns, the length of the marriage, the ability to pay, and more, also play a part.

Though called permanent support, that’s rarely the case. And when it does continue indefinitely, it’s usually because of disability and inability to work.

Related Reading: How To Petition For The Dissolution Of Marriage

Can You Modify Spousal Support?

Just because the court orders spousal support, and just because the name says permanent, doesn’t mean you can’t alter or end the payments. Either spouse can request modification or termination due to changes in financial standing, like the loss of a job.

If the recipient remarries, support should end. Payments also end if one party dies. No one can compel you to continue payments to the estate of the deceased, nor can you collect payments from the deceased’s family.

Modifications to the original agreement can happen if two spouses can agree on the terms. Both sides still must enter into a written contract that explicitly states the new details, and a judge must sign off to make it official.

If you can’t reach an agreement, going to court may become necessary. The party who wants to modify the arrangement must file a motion to show that his or her financial circumstances have significantly changed since the original order.

The court, of course, requires evidence to back up these claims and will issue a ruling based on what it sees.

Related Reading: How Are Assets Split In A Divorce In California?