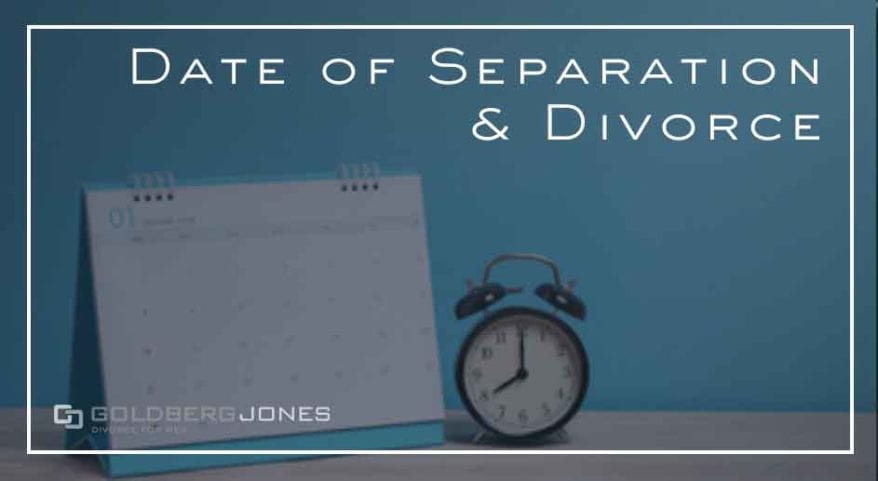 The law is not static, so the court system continuously modifies rules and regulations. In California, one example that has an impact on divorce cases is how courts view the date of separation.

How Does The Date Of Separation Affect Divorce In CA?

When it comes to divorce, the date of separation plays an important role. Along with your marriage date, it contributes to determining the division of property, spousal support, and more.

California is a community property state. This means the court views all assets, possessions, and even debts acquired during the marriage as belonging equally to both spouses.

Importance Of Date Of Separation

Once the date of separation is established, that’s the cut-off point. After that, any monies earned, property acquired, pension or retirement benefits accrued, belong to one spouse, not both.

Everything that falls between the date of marriage and date of separation is community property. Everything outside of that timeframe, the court views as separate property.

While that seems pretty cut and dried on the surface, complications often arise. In most cases, when a couple is in the process of divorcing, one party moves out. Though that’s usually the situation, it isn’t always. In these and similar circumstances, shades of gray creep in.

Divorcing couples often continue to cohabitate for financial motives, to provide a stable environment for children, and for any number of reasons. They may be in different rooms but still reside under the same roof.

In 2015, the California Supreme Court ruled on a case where a marriage was, for all intents and purposes, over. However, they continued to live together. The court determined because of this, they were not legally separated.

So this marriage continued in a legal sense. The court reasoned that it was upholding a state statute from the 1870s stating that couples must be “living separate and apart” to establish a date of separation.

Related Reading: We Got Divorced, Why Am I Still On The Hook For The Home Loan?

The New Date Of Separation Law

This, however, changed in 2016. In direct response to this ruling and similar cases, California’s then-Governor, Jerry Brown, signed State Bill 1255. This new legislation redefined the date of separation or at least allowed for discussion on the matter.

Basically, in order to set the date of separation you must behave like you’re getting divorced. You can still live in the same home, but you can’t continue to go out in public and act like you’re married.

Holding hands, romantic dinners, all of that goes against the general idea. As do continued efforts to resuscitate a marriage, like counseling. Such efforts defeat the purpose of SB 1255.

SB 1255 changed the existing laws to allow couples to file for divorce, serve the other party, and get the ball rolling without actually having to move out.

This recognizes that there is a firm, final end to a marriage and allows the divorce to proceed from there. As you can imagine, this has a number of significant effects.

As in many divorce cases, the new date of separation law has the biggest impact on longer marriages. When the length of a union reaches ten years, it creates a number of additional issues to consider.

Beyond the decade mark, you may be eligible to collect a portion of certain retirement benefits. After that point, spousal support may be ordered on a permanent basis. Social Security and military pensions, however, hinge the actual termination date of a marriage, not the date of separation.

Previously, living together, even though you intended to divorce, essentially prolonged a marriage. Now you are able to establish a solid date of separation and protect your assets.

Any benefits you accrue after that fact are viewed as separate. They remain individual rather than community property, regardless of the living situation.

Before, the rule was very clear—you either live together or don’t—whereas the new rule offers more wiggle room. Those who oppose SB 1255 argue it will result in an increase in cases that may clog the courts and slow down the process.

If one spouse files for divorce, in that situation, the line is distinct. But in circumstances where the process hasn’t officially begun, there may be issues. If the spouses can’t agree on the date, or if one party claims the other’s conduct was inconsistent with the intent, problems may still arise and a more intense, in-depth dissolution may be necessary.