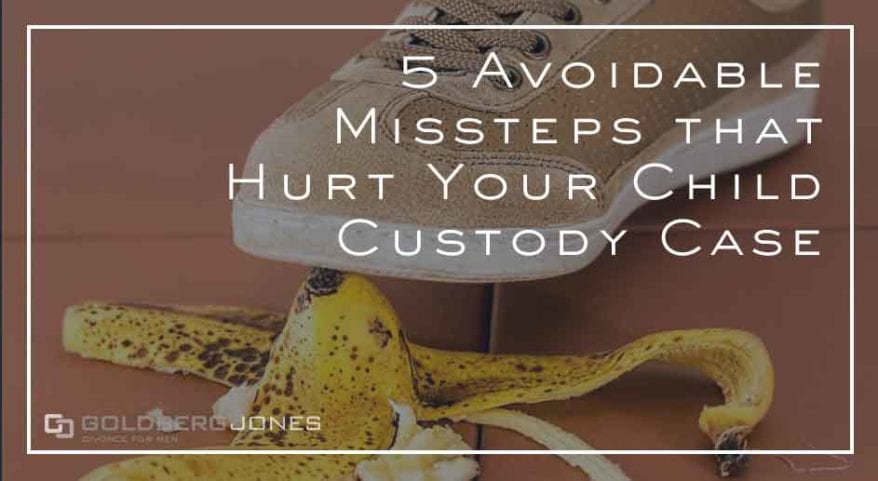 Like other family law cases, child custody battles often become complex and heated. It’s easy to miss details along the way, but such oversights have a high cost.

Too often, mistakes, errors, or lapses in judgment have significant and lasting consequences. With that in mind, here are a few common, easily avoidable missteps that can hurt child custody cases.

Moving out of a shared home may seem like the best choice when ending a marriage. After all, who wants to live with a person you’re about to divorce? By this point in the process, it’s common for spouses to live apart. However, this can hurt child custody cases.

You may want nothing to do with your spouse, but moving out and leaving children often reflects poorly on you as a guardian. It may look like you’re not a dedicated parent or that you abandoned your kids. Whether or not that’s true, it often appears that way. And if your case is heated, the other side may try to paint you with that brush.

Related Reading: Should I Move Out During a Divorce?

2. Not Seeing The Kids

If you pursue custody, it’s difficult to make a case that you’re the best parenting option if you rarely spend time with your kids. Again, whether or not it’s true, it can appear you’re not interested in being a parent and that may hurt child custody claims. Make sure to take advantage of the opportunities you have to see your kids.

Don’t skip scheduled visitation. Not only is that detrimental to your children, it can weaken your legal position.

Also, keep a detailed record of the time you do spend with the kids. Then, if your ex claims you don’t see them enough, you have proof to the contrary.

Temporary orders commonly occur when parents dispute child custody. They make sure that children are looked after and properly cared for during the process.

Temporary orders lay out where kids stay, visitation schedules, and who maintains decision-making power in the short term. One thing that frequently hurts child custody cases is ignoring these decrees.

They may only be temporary, but they’re still official court orders.

Disobeying them has serious consequences. Stick to the visitation schedule and clear any deviations from the program.

Don’t just decide to the kids an extra night or take them out of town to visit the grandparents. That negatively impacts your case and can lead to fines, contempt charges, and even jail time.

Courts generally recognize having both parents present as the best-case scenario for children. And as a child’s best interests are paramount in custody cases, unless there are extreme circumstances, you’ll most likely have a shared custody arrangement.

One thing that may hurt child custody cases is when people refuse to cooperate.  This means that you have to maintain at least some level of communication and collaboration with your ex.

You may not like or want to see your ex ever again, but when you have kids, that’s rarely an option. Put your differences aside and focus on your children. They need your time and attention, not your ex, so give it to them.

Again, they’re actual court orders and ignoring them has serious repercussions. And in the end, they only exist to benefit your children.

When you make these child support payments, it’s also important to leave a paper trail. Use methods that you can track, like checks or bank transfers. That way, if your ex claims you didn’t pay, you can show otherwise.

Also, don’t say you can’t afford the payments then show up to court in a new sports car or post expensive vacation photos all over social media.

Child custody cases have a significant impact not just for you but for your children. It’s important to approach with a plan and strategy. Many parents hurt child custody cases with mistakes they could easily avoid. These are just a few to watch out for.

In the end, the child’s best interests are the primary concern, and that usually shows through your actions.