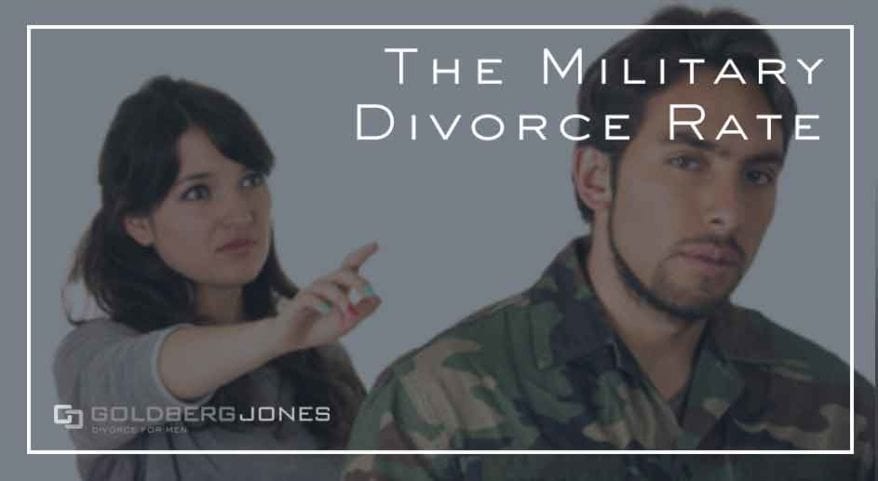 Serving in the military entails significant sacrifice. Not only do the men and women of the Armed Forces put themselves in harm’s way for the greater good, their personal lives also take a substantial hit.

Long deployments, the stress of combat, and lingering wounds—both literal and figurative—take their toll on marriages and family. As big an issue as it can be for military families, the military divorce rate has declined steadily over the past few years.

Coming back from war, service members face a number of challenges readjusting to civilian life. Combat experiences can close people off from loved ones.

As tough as all of this can be on a marriage, according to the latest statistics from the Department of Defense, the military divorce rate has actually gone down. This isn’t a precipitous drop-off, but while gradual, the decline remains steady across the board.

In 2015, the military divorce rate dropped to an even 3% for the calendar year. This number includes both officers and enlisted service members from all four branches of the military.

In fact, when broken down by a specific demographic, the only upswing came from female Marines. Among all other troops, male as well as female, the numbers went down. The sharpest drop in the military divorce rate came from female sailors, where divorces dipped from 7.5% to 6.5%.

Divorce is tough at any time, but going through a divorce while in the military presents a number of unique challenges and complications.

Deployment: Being away from loved ones for months at a time is one of the toughest things about military service. Embroiled in a heated divorce or custody case, it’s an especially inopportune time for your country to call on you.

Jurisdiction: Military families often move more than most. Establishing what state and county have jurisdiction in your divorce or child custody case becomes tricky.

Though service members face a number of unusual challenges in divorce, there are measures in place to help. Some are specific to the military, like the Servicemembers Civil Relief Act.

Others, like the Uniform Child Custody Jurisdiction and Enforcement Act, also apply to civilians, though they have applications for military families.

When it comes to military divorce rates, some spouses file for the dissolution of marriage during a deployment, thinking it provides an edge. After all, it’s hard for the other person to contest a divorce or child custody claim stationed thousands of miles away. However, the government put the Servicemembers Civil Relief Act into place to safeguard against these situations.

Enacted in 2003, the SCRA provides protection for members of the military in a number of regards, including legal matters. If your spouse files a civil action against you while you’re deployed, this legislation provides an automatic stay on your case.

Hearings may even be postponed until the deployed spouse returns from duty. This gives the military member the time and space to receive the information and respond accordingly.

Though it doesn’t apply to criminal proceedings, divorce, child custody, paternity, maintenance support, and most other family law cases fall under the SCRA.

Due to the frequent moves often required of service members, determining what state has jurisdiction becomes tricky. When it comes to child custody cases, the Uniform Child Custody Jurisdiction and Enforcement Act plays a vital role.

Not exclusive to military families, the UCCJEA lays out the ground rules for establishing jurisdiction in child custody battles. Through a complex system of guidelines, this legislation sets out how to confirm a child’s “home state,” hence what court maintains authority.

Determining jurisdiction takes into account a number of criteria.

Most deployments are longer than six months. As a result, it’s possible for a non-deployed parent to:

One way to guard against this is for both parents to legally determine the home state prior to shipping out.

Serving in the military is a huge sacrifice. Both veterans and active duty service members face a number of challenges. As do their families. Being married to someone who’s gone for long stretches of time is tough. Still, the military divorce rate has steadily declined over recent years.