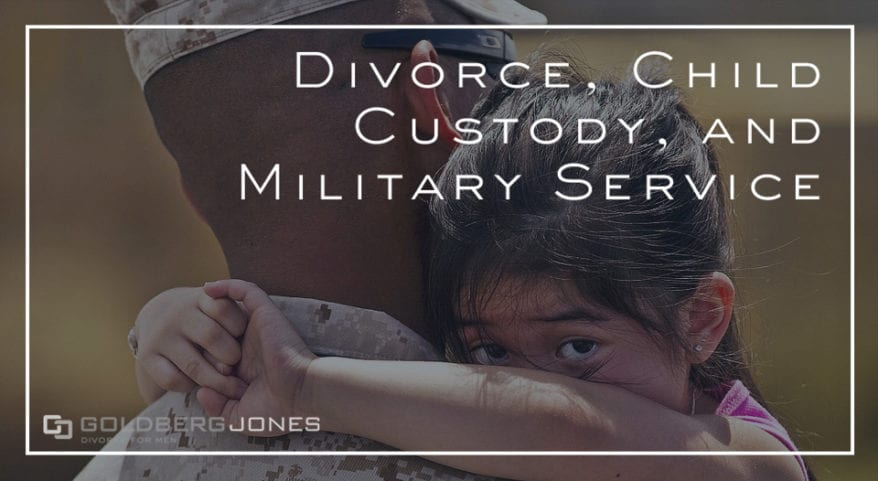 The men and women of our Armed Forces make huge sacrifices to serve. Away from family for extended periods, often puts unbearable strain on a relationship. Many don’t survive. While it may impact a marriage, it may also alter the divorce process and child custody cases.

Getting a divorce is a tough task anytime, but how can you contend with this if you’re halfway around the globe serving in the military?

One of the toughest things military service members deal with is being away from loved ones for months at a time. Deployment in the midst of an ongoing child custody battle only exacerbates the situation.

What Is The SCRA?

The SCRA aims to provide servicemembers peace of mind from legal issues arising at home while they were fulfilling their duty to their country.

This act has proven effective in protecting employment, benefits, and property. However, the blanket of protection SCRA provides does not extend to cover custody issues. Fortunately, the government instituted laws like the Uniform Deployed Parents Custody and Visitation Act.

Related Reading: How Are Military Pensions Divided in Divorce

This act is described by the ULC as:

An act that provides standards and procedures for resolving visitation and custody issues affecting military personnel and their families, which may include resolution of matters in intrastate, interstate, and international contexts.

What this act means for servicemembers: This legislation attempts to standardize and simplify the rules covering military custody rights and visitation issues for deployed parents.

The passing of the UDPCVA marks an important step forward in maintaining the rights of military personnel and in protecting the parent-child relationships of American military members.

Some civilian parents file for child custody during a military deployment hoping this gives them an advantage. The Servicemembers Civil Relief Act, however, provides safeguards for service men and women.

Federal law offers special treatment for armed forces members in court cases. Depending on your involvement with the armed forces, this can either be good or bad for your case.

For military members, the SCRA puts an automatic stay on your case so a judge can’t rule for a time. This is to give the deployed parent the opportunity to receive notification and take any necessary legal steps.

Non-military spouses may find this frustrating. The SCRA means the process moves much slower than usual. Service members get additional time to respond to legal documents, and hearings may be postponed until they return from deployment.

Despite taking military service into consideration during child custody cases, the best interests of the children remain the highest priority.

Things may be delayed, but the immediate health and well-being of the child take precedence. Even if there is a successful SCRA request for a stay, the court may still issue a temporary custody order to the parent at home. This helps quash abuse of the SCRA and also ensures children are properly cared for at all times.

What State Has Jurisdiction In Your Case?

Military families often move from base to base and city to city. This is a huge hardship for many families and is one of the many sacrifices service members make. When it comes to divorce and child custody, it also brings up the question of what state has jurisdiction in a particular case?

This is where the Uniform Child Custody Jurisdiction and Enforcement Act comes into play. Not exclusively governing military families, the UCCJEA protects minors and determines the jurisdiction in child custody cases.

A complicated set of regulations, the UCCJEA establishes rules about the child’s “home state,” thus protecting their overall well-being.

Usually, the home state is where a child has lived for six months prior to legal action. Deployments are often much longer than this. In the absence of one parent, it’s possible for the non-military parent to establish residency in another state. A possible safeguard is, prior to deployment, for the parents to agree on what state constitutes the permanent home.

Related Reading: Jurisdiction: Does Where You File for Divorce Matter?

Frequent moves not only impact the child custody process, they can also continue to pop up after the fact. Relocation after divorce is one thing, but children complicate matters in that regard. And military service further confounds things.

Custodial parents must follow a number of rules in order to relocate. In normal situations, you have to show how a move benefits the child, get permission from the court, and work out an arrangement with the noncustodial parent.

These regulations vary drastically from one state to another. And you have to figure out all of this well ahead of time.

If you’re in the military, however, you don’t really have the choice to wait. You have to go where the government sends you when they send you. Again, many states extend protection and safeguards to military parents in this regard.

In most cases, the custodial parent is required to give advance notice to the other party—this is often 60 days but depends on the state. Some jurisdictions, however, have emergency provisions for situations where the parent couldn’t have known that far in advance, as with deployment.

Again, depending on which side you fall on, this can either be a benefit or detriment. If you’re a military parent, it’s obvious to your benefit. On the other hand, for non-military, non-custodial parents, this can cause problems. Either way, this is an issue you should be aware of and prepare for.

A family care plan lays out the childcare strategy for when a service member deploys. This covers both short and long-term absences.

Depending on the branch of the military, the specifics vary some, but the basics remain generally the same. They primarily deal with logistical concerns and day to daycare. You must submit these plans must to the military before shipping out.

Family care plans cover a variety of areas, including:

Who Watches the Kid(s)?

When the parents deploy, who watches the children? The family care plan must include a civilian at least 21-years-old to serve as a caregiver.

This must also include all relevant contact information and confirmation this individual actually agreed to the task. Depending on the situation and length of deployment, you may name multiple caregivers for various circumstances.

Most often this is a nearby relative, so as not to upend the child’s life completely. But when it comes to longer tours, a child can be sent to stay with another parent across the country.

How the Kids Will Get There?

Having someone in line to watch your children is important. So is how they reach their destination. The military wants to know the transport details, down to who pays for a plane ticket, who picks the minors up at the airport, and any arrangements to swap from one caregiver to another.

If the child’s other parent is not named the caregiver in the case of deployment, the family care plan must include written consent.

Who Supports the Child Financially?

Not only must you choose a caregiver, but you must also provide this person with power of attorney, access to bank accounts, and the like. This allows another individual to act on your behalf in financial matters in your absence. It’s important to not only know who is taking care of your kids but also how they will accomplish this.

Who Gets Custody in the Event of Death?

Nobody wants to think about this one, but the possibility of death is a harsh reality of military service. A contingency plan needs to be in place, just in case. If there is another parent, he or she almost always gets custody. If this person doesn’t have contact or visitation due to issues like abuse or neglect, another individual may be designated as guardian.

Dealing with both parenthood and military service is a delicate balancing act, even if you fall on the civilian side. You need to account for a variety of unique, specific circumstances and situations.

Related Reading: What is Legal Separation?