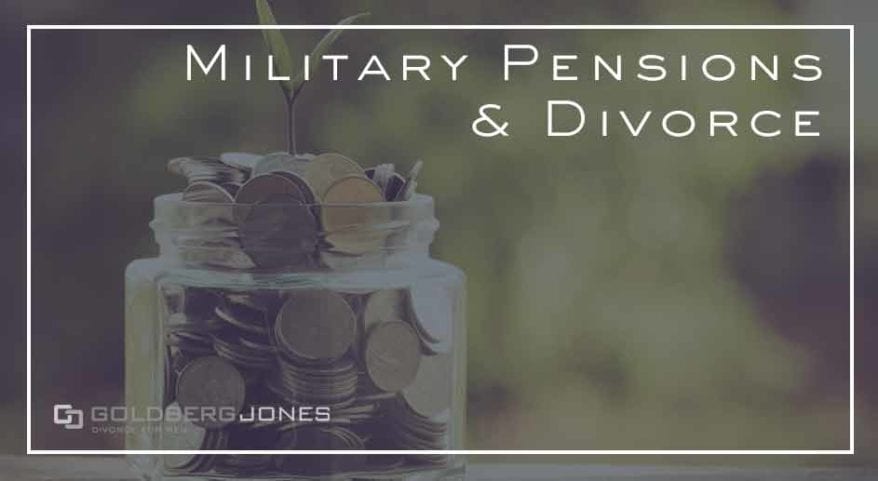 The men and women who serve in the armed forces face a number of hardships. One that often goes overlooked is the strain military service puts on a marriage.

Not only is there worry about one spouse’s safety, but long deployments away from home, where a family is separated for months at a time, may ultimately be a burden too heavy for some relationships.

Many relationships simply can’t survive this. As a result, members of the military have a higher-than-average divorce rate.

While it often impacts a marriage, military members also face a number of unique issues in divorce. An area of particular concern is finances, particularly pensions.

How does divorce affect your pension?

Members of the military earn a pension as a retirement benefit. That kicks in after 20 years of service and can be collected throughout the rest of their lives.

This act allows state courts to treat military retirement pay as communal marital property. In the case of divorce, the courts can divide this between two spouses.

The question is: What does divorce mean for dividing a pension if you are in the military or retired from the armed services? The other side of that coin is: What are you entitled to if you are or were married to a member of the military?

When You Retire From The Military

A service member’s pension can be an extremely valuable piece of a divorce.

Military families often move frequently. They can miss out on opportunities to acquire property and accumulate other material assets, and sacrifice the possibility of alternate employment that may have been more lucrative.

In many splits, these retirement benefits may form one of the most significant, substantial resources to divide.

Under the USFSPA, as long as the court has jurisdiction over a divorce, the state, including California, has the authority to divide the military retirement benefits of a service member. The legislation allows for this but does not require the division of military pensions.

The USFSPA does not guarantee your former spouse a portion of your military pension. It must be awarded as part of the division of property in the court’s final order.

That said, if you were married to your spouse for ten years or more, overlapping with ten years of service, your ex may be entitled to up to half of your retirement. The final amount is ultimately negotiable and subject to a number of considerations.

If the marriage was shorter than that, a spouse can ask for half. Even if the union was longer than a decade, a service member can also request to pay less than 50%.

For marriages lasting less than ten years, under California law, your spouse is still entitled to a portion of your retirement benefits. The formula for determining how much revolves around the number of months of creditable service performed during the time you were married.

In the process of divorce, you can come to an agreement about how to divvy up the retirement benefits. There are cases where a spouse may be willing to accept a smaller portion of the military pension in exchange for other valuable items. For instance a house or joint property.

Under the USFSPA, there is no set-in-stone procedure for the division of these benefits. Despite many who believe the contrary, there is also no minimum overlap between marriage and service that qualifies a military pension as community property that can subsequently be shared.

If You Divorce A Member Of The Military

If you are the spouse of someone in the armed forces and want a portion of their military pension in an impending divorce, it’s important to address this prior to signing the final orders, not after.

If you wait until the marriage is officially over, or if you fail to obtain the necessary court order, it may be impossible to divide the retirement benefits after the fact.

Even if retirement seems like it is a long way off, you may want to bring up the topic of splitting the military pension ahead of time. As a spouse, you can’t collect on your ex’s benefits until the retiree actually applies for them.

If a divorce takes place while one of you is still an active-duty member of the military, before the pension kicks in, the division may be conveyed as a hypothetical award.

Some states allocate the disposable retired pay—the portion of the military pension that remains after a number of deductions, like exchanging retirement pay for disability—which can significantly reduce the amount split in a divorce. California state law, however, calls for the division of the total retirement.

Related Reading: How Long Until a Spouse Qualifies for Your Pension?

The 10/10 Rule And Military Pensions

In cases of dividing a military pension in a divorce, the 10/10 rule is a source of much confusion. Many people take this to mean that the spouse of a service member is only eligible to receive a portion of the retirement benefits if the marriage lasted at least ten years and at least ten of those years were spent in creditable military service.

That, however, is not the case.

Instead of dealing with whether or not one spouse can collect a portion of the military pension or not, the 10/10 rule simply establishes where the payment originates.

If you were married for ten years, and ten of those years counted toward the military retirement benefits, and that pension is later divided in a divorce, the payment will be delivered by the Defense Finance and Accounting Service. Otherwise, the checks come directly from the retired service member.

No two ways about it, when it comes to dividing up a military pension at the end of a marriage, it’s a tricky business. There are a number of factors to take into account. Despite falling under the umbrella of the USFSPA, the rules and regulations vary greatly from state to state.