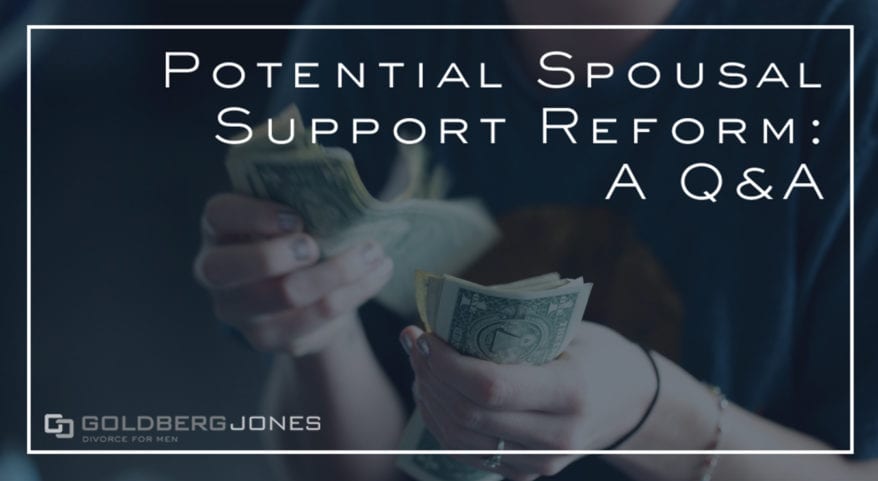 During divorce, the issue of spousal support, often called alimony, frequently comes into play. These payments—they can be one-time or recurring—are designed to create a balance, financial equality between spouses.

The courts usually award spousal support in situations where there’s a significant discrepancy between incomes or earning potential. In general, the basic idea is for these payments to be temporary, or “restorative,” and give the lower-earning spouse the time and resources to become self-sufficient.

In reality, spousal support doesn’t always play out like this.

For marriages shorter than ten years, spousal support usually lasts roughly half the length of the marriage. It’s when a marriage lasts longer than ten years that things often go sideways.

The courts have a great deal of discretion when it comes to awarding maintenance. Many factors play into the ultimate decision. Income, health, age, the length of the marriage, the standard of living during the marriage, and more all have an influence. Due to a variety of issues, it’s not uncommon for spousal support to continue indefinitely.

If one Huntington Beach man has his way, however, that will change soon.

Steve Clark, a divorced software engineer and father, has proposed an initiative to amend the California Family Code, specifically the section dealing with spousal support. Under this reform, the courts would limit alimony to no more than five years.

There’s a long way to go before this matter even gets to voters. Clark and company have filed the paperwork but still need to collect the necessary signatures–more than 600,000. However, they’re optimistic and hope to put the initiative on the ballot in 2020.

While there’s still time to wait and see what happens in this case, there’s no denying spousal support and alimony are hot-button topics. There’s certainly an ongoing discussion to be had.

As part of this larger dialogue, our managing attorney, Zephyr Hill, stopped by AirTalk on KPCC to give his opinion on the topic to host Larry Mantle.

Take a Listen Below:

Larry Mantle: What would you modify about spousal support if you could?

Zephyr: “More often than not, we’re representing the breadwinners and the payors of spousal support. So to have an end date on a lengthy marriage would be a great benefit to my clients.

“Otherwise, it’s at the discretion of the court, so you can get good results and bad results. It would be difficult to say there’s something inherently wrong or right with the current system, given that it’s up to the particular judge when it comes to permanent determination, and you’re not using the guideline anymore.”

LM: Do you feel like that’s too much latitude for judges? Or are there so many moving parts in dissolving a marriage that it has to be left in the judge’s hands?

Zephyr: “It’s easy to sit on the sidelines and want something more simple, or more objective, or predictable. But then you’ve got all these people’s lives. They’re all different. You want some discretion and you want some ability to argue the facts or to interpret the situation and do what’s right in that specific instance.

“I like that there’s some discretion there to look at the standard of living during the marriage. How they lived, how they spent, and how they saved. That’s all very relevant to the determination.

LM: Do you feel the judges in most cases do a good job of assessing the recipient’s ability to get a job, the person’s employability, and factor that in?

Zephyr: “I might be biased in this, but that’s definitely a scenario where I feel they’re a little too soft on the supported spouse. That person doesn’t always have to put their best foot forward in terms of getting an education or working harder or taking on more hours. You see a lot of leniency on that end. I think that hurts the payor more often than not.

“The other thing we have to mention is this bright-line rule that at ten years, where you go from, ‘Okay we’ve got an eight-year marriage and I’m going to owe for half the length of the marriage, so I’m going to owe for four years.’ But as soon as you get to ten years, there’s this magical potion that comes into play, where all of a sudden I owe in perpetuity.

“Presumably, at some point, I can get out of it, but I’ve got to go fight for it now. I’ve got to go back to court and say, ‘Hey, I think it’s been long enough, I don’t think he or she needs the support anymore. I can’t afford to pay it anymore.’

“That puts a lot of pressure on someone who’s struggling in their marriage at nine, nine-and-a-half years. I’m sitting in consultation with somebody saying, ‘Geez, if you’re going to do it, do it now.’ And that’s not really what the state wants. We don’t want to have the kind of pressure that would encourage people to get divorced, but that is definitely the impact that it has.”

LM: “Yeah, for my first marriage, we made sure to file before ten years, so retirement plans, all that stuff didn’t end up complicating the dissolution of our marriage. I was eligible for spousal support because I was starting in radio and made next to nothing, and my wife was very highly paid working in the entertainment industry, would have been absurd.

“Here she was doing a favor by supporting us to get me started in my career, for which I owed her big time for her doing that. Then to turn around and have to pay me spousal support, that would have been pretty cold-blooded on my part.”

Related Reading: We Were Married 40 Years, How Complicated Will Spousal Support Get?