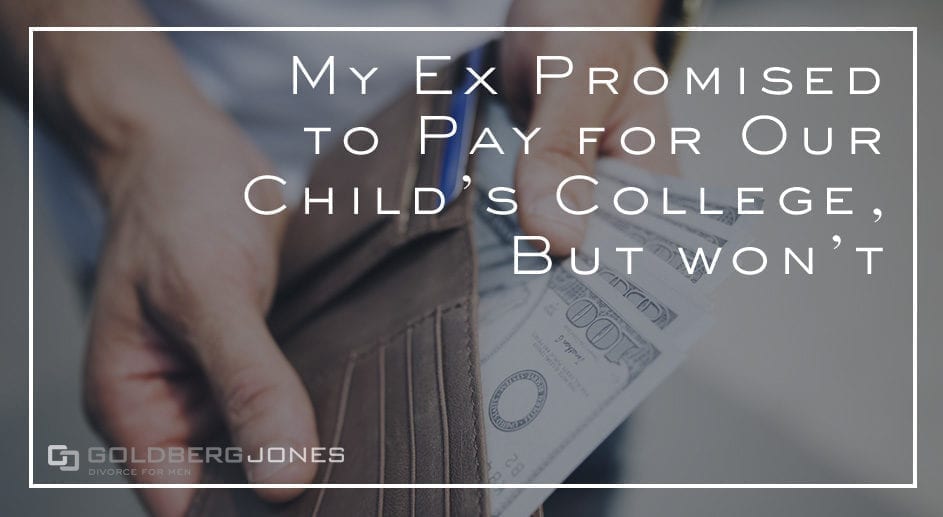 This probably comes as no surprise, but college costs quite a bit. Student loan debt is a hot topic right now. But it can also be a huge lingering burden on young people trying to move forward and start their lives. As parents, not all of us are in a position to help financially. But if we can, it benefits our children a great deal.

Following a divorce, child support forms a huge part of the puzzle if you have kids. These payments cover everything from food and shelter to medical care and other necessities. In most cases, this obligation ends when a child turns 18-years-old or graduates high school. There are circumstances when it may continue, but that’s the norm.

So what about college or post-secondary schooling? Who pays for that? Are there ways to ensure both parents contribute equally to furthering a child’s education? As usual in legal matters, it’s complicated and there’s quite a bit to consider.

One of our founding partners, Rick Jones, makes regular appearances on the Danny Bonaduce and Sarah Morning Show, where he addresses family law questions from listeners. On a recent episode, he fielded a call from a parent who has questions about paying for college.

Upon divorce, she and her ex agreed to help with their oldest child’s tuition. They didn’t, however, put anything in writing.

Now that it’s time to pay up, her ex changed his mind and refuses to kick in what he promised. She wants to know if she has any legal recourse and how to avoid a similar conflict with their two younger children.

Related Reading: Do I Still Have to Pay Child Support if My Child Leaves Home?

Listen to the Caller Question:

Caller: “I was divorced about four years ago, and I have three children. In the divorce, we agreed to decide at a later time how to support the kids going through college. The oldest of the children graduated high school last year and went off to college this fall.

“Before all of that happened, she and my ex-husband and I sat down and we talked about what would be reasonable support for her going through college. He agreed to pay, basically the same sum of money he was paying for child support. Instead of paying it to me for her support he would pay it to her so he could support her through college. And that was what we agreed to.

“Unfortunately, we didn’t file any legal documents to that effect. And after she turned 18, he took that back and said he wasn’t going to pay the support. So now she’s at college and making her way without the support.

“When I did some research on that, it said that all of those documents needed to be filed before she turned 18 and that I was pretty much out of luck getting support for her.

“So my first question is: is that true? And the second question is: how do I get something in place so that my next two kids who will be going to college in four or eight years so they can get some support from their dad when they go to school?”

Related Reading: How Is Child Support Calculated In California?

Rick: “Unfortunately, I’ve got some bad news regarding your oldest child. The research you’ve done is correct. You needed to file to establish a post-secondary education amount to establish that prior to the support order ending for that child. So that part is a problem. I guess the only saving grace is that wasn’t your one and done, you’ve got two more. He fooled you once and he’s not going to fool you again.

“Ultimately, what you now know is that you can’t trust him in any way shape or form. So what you’ll do is bring a motion to the court…to establish post-secondary expense.”