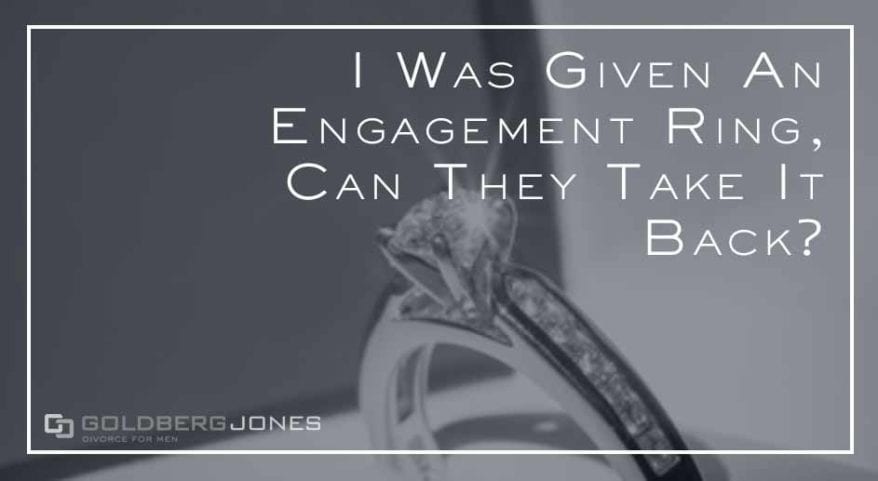 The old saying goes, possession is nine-tenths of the law. That’s not exactly a legally binding statue, but the underlying idea often plays a role. One situation we see frequently involves engagement rings.

One of our founding partners, Rick Jones, makes regular appearances on the Danny Bonaduce and Sarah Morning Show where he answers listeners’ questions. A caller finds herself in a strange situation involving an engagement ring. A family friend gave it to the happy couple only to later have a falling out and demand the ring back. In this situation, what’s she obligated to do?

Check out the answer below:

Caller: “So my fiance and I were given a ring from a family friend. The ring is in her name from her husband and then he passed away, so she gave it to us as an engagement gift. She got into an argument with my soon-to-be mother-in-law and it just turned nasty. She requested we give the ring back. Do we have to give her the ring back or can we keep it?”

Rick: “Well, the fact that this is, some of the words you’re talking about are engagement and rings. This actually has nothing to do with family law. This is simply, someone gave you a gift, they’re asking for it back. We all sort of understand why she would want it back, but that doesn’t mean you’re required to give it back.”

Danny: “Right, and there’s also the old, whether it’s family law or regular law… possession is nine-tenths of the law. You have that ring. Now if you deal with people who are above board, like if you’re dealing with me, I’m going to come get that ring no matter what you want, you made me mad.

But if you’re dealing with a person who’s not going to come over in the middle of the night to get her ring back, just tell her ‘no!’ and nothing. It’s my advice, too, not Rick Jones. Nothing will happen. The ring is not worth the legal fees to pay to get that ring off your finger, that’s your ring.”

Sarah: “Someone just needs to apologize and get over this, it’s a ring.”

This caller’s situation is rather unusual. That said, we often hear questions about engagement rings and who actually owns them. California law has a particular statute that deals with this topic, specifically premarital gifts, like an engagement ring.

Civil Code 1590 considers an engagement ring a gift “on the basis or assumption that the marriage will take place.”

If the marriage doesn’t happen, “in the event that the donee refuses to enter into the marriage as contemplated or that it is given up by mutual consent, the donor may recover such gift or such part of its value as may, under all of the circumstances of the case, be found by a court or jury to be just.”

Essentially, if the person who receives the ring goes through with the marriage, the law considers it that person’s property. If no one walks down the aisle, however, the giver does have legal recourse to get it back.

Related Reading: The Awkward Conversation of Asking for a Prenup