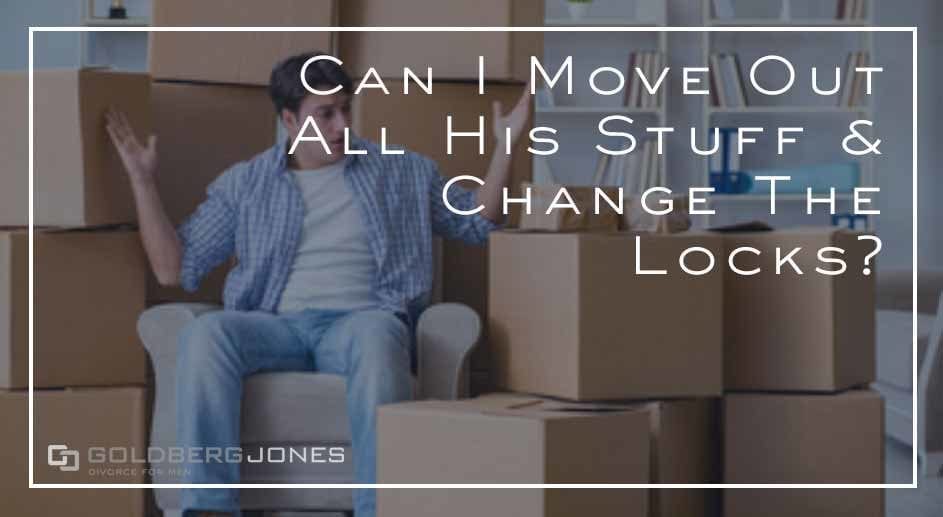 If you’re having marital problems, you’ve probably had at least one moment where you want to throw your spouse’s possessions on the front lawn, change the locks, and never look back. Few times are as trying and frustrating as divorce. But when you have this impulse, can you? Legally speaking? And can your spouse do it to you?

Our founding partner, Rick Jones, regularly stops by the Danny Bonaduce and Sarah Morning Show to answer family law questions from listeners. One recent caller has had it up to the metaphorical ‘here’ with her husband and wants to know if she has legal grounds to give him the boot. Turns out she might, but whether or not that’s a good idea remains to be seen.

Caller: “I am…so over my husband right now. To sum this up, we have no kids. I own the house. I’ve always owned it and lived in it since we’ve been married. He’s rarely home and when he is he’s a train-wreck. Next time he’s on the road for work, can I move out all his stuff and change the locks, because I’m just tired of the whole thing.”

Rick: “Well, when there’s nothing filed with the courts, that means the court has not issued any sort of order putting any rules in between the two of you. So, I call that ‘self-help.’ So I guess the answer is, yes she can. Now the question though, is what does he do? The repercussion is that it may end up making you look bad if it does become a court issue.”

Danny: “To who though, Rick, that’s the thing. Most of the stuff I know about this stuff comes right out of your mouth. So here’s the thing: who’s she going to look bad to if its a no-fault state, don’t you just, not care?”

Rick: “With some of the facts she talked about it’s probably not ever going to get to the court, right, because what’s he gonna do? He’s going to come back and say, ‘My stuff’ is here, it’s just outside.’

“But, imagine a circumstance. Let’s say they had kids, that there was a contested custody issue. Because right now, we’re only hearing her side of the story.

“There’s always two sides, so let’s say he comes back and has a good argument. He says, ‘And by the way, to demonstrate what I’m talking about this person, look at what she did while I was out on the road.'”

Danny: “So we agree that she can do it, it just might not be in HER best interest to actually physically do it.”

Rick: “It wouldn’t be legal advice.”

If you have questions about your case, contact Goldberg Jones. Our San Diego divorce lawyers are here to help!