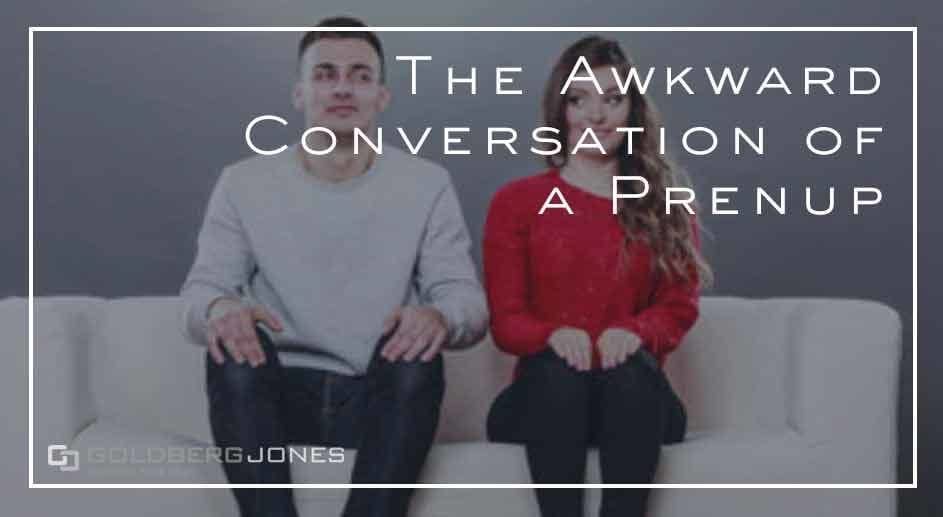 Creating a prenuptial agreement is often a useful, prudent move before marriage. But there’s a stigma attached to these documents. Many people view them as a sign that spouses don’t trust each other or they think a union is doomed to fail. Even though this isn’t necessarily the case, bringing up the subject often becomes awkward.

So, the question is, how do you ask for a prenuptial agreement? One of our founding partners, Rick Jones, makes regular appearances on the Danny Bonaduce and Sarah Morning Show, where he answers questions from listeners. On a recent show, this very topic came up.

Listen to Rick’s advice below:

Email: “I’m engaged to be married next spring. My fiance is the love of my life but she is in a much lower tax bracket than myself. I have a considerable income. I own businesses, I own property. Because of this, friends and family persistently urged me to get a prenuptial agreement. I understand the instinct to protect assets, but on an emotional level, I struggle with it.

“How can I tell the person I want to spend the rest of my life with that I don’t trust she wants to do the same?”

Rick: “There’s a presumption that he’s making that it’s somehow about trust…”

Danny: “Hey wait, now I’d have made that. I’d have thought it’s all about trust, it’s not?”

Rick: “Basically what you want to do, and the purpose of a prenuptial agreement is, is to acknowledge exactly where things stand right now. When you get married, you go into business together. [The state] treats it as a business when it dissolves. Same word that you use when you dissolve a business. So the reality is you’re basically saying, ‘Here’s where we stand, here’s what I bring into the marriage, here’s what you bring into the marriage, here’s the conditions we’re going to use,’ if, in fact, this doesn’t work out.”

Sarah: “Have you had…obviously you’ve drawn up a lot of prenups, do you have recommendations on verbiage to say to somebody?”

Scott: “Because it isn’t the most romantic thing in the world to say, ‘I want you to sign this prenuptial agreement’.”

Rick: “No it certainly isn’t. By the time we see somebody, they’ve come to us, we’re not soliciting the creation of a prenup. They’ve come to us, so there’s already the concern. Again, I guess I am going to step away from the word ‘concern.’  There’s already a ‘responsibility’ they’re bringing to this, so it’s fairly rare that that prenup then gets ripped up.

“I mean ultimately, if somebody is uncomfortable with you recognizing that you’re bringing something into the marriage, and they’re going to turn that around and make it about emotion, perhaps that’s a warning sign.“

Danny: “Wow. That was awesome. I didn’t see it coming in that direction at all. You know, I, have never had [a prenuptial agreement]. And I’d be a lot happier with my last divorce had I had one.  Although it’s hard to get a girl to sign a prenup when you have nothing and might be going to jail. But still, she did fine.

“So then I wanted one with Amy because I thought it’s the prudent thing to do. It’s the smart thing to do. And as a matter of fact, Mr. Jones helped me work out a little document that she was good with. She encouraged it because I was acting oddly, thank you very much for your hard work by the way.

“And then we went with the, ‘You know what, don’t sign it.’ And the good news is I’m old and going to die relatively soon, so I think she’ll just put up with whatever I got going on until she’s what, 40, 45, and I croak and she spends all the dough? That’s the way I see it.” [Background Laughter]

If you have questions about prenuptial agreements or need to speak to a divorce lawyer, contact Goldberg Jones. Our San Diego office is here to help.

Related Reading: Can My Ex Come After My New Spouse’s Income?