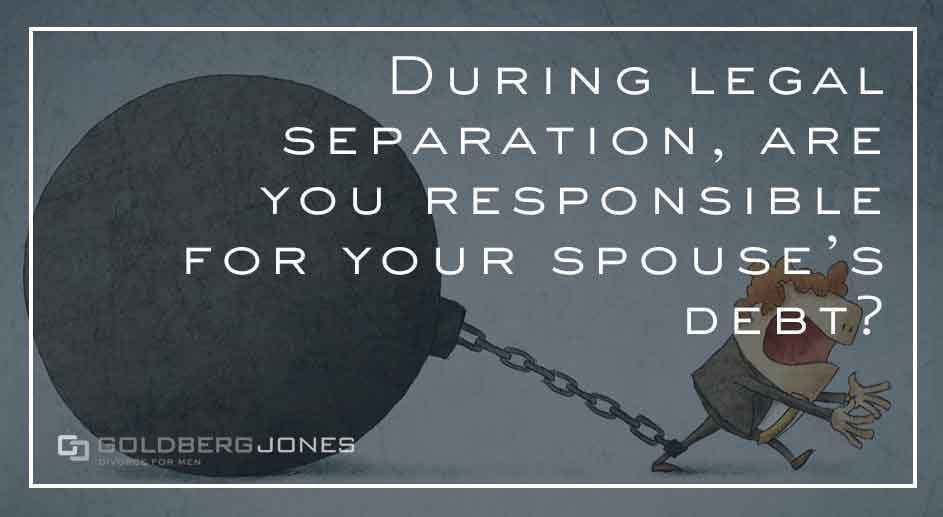 Marriage means intertwining two lives. When a marriage ends, divorce is the process of untangling them. Part of that means dividing up any shared assets you amass together. Another unfortunate part is splitting up any shared debt. That can be a big financial blow. But what happens if you live apart but never officially divorced, yet your ex continues to run up the bills? In situations of legal separation, are you still responsible for your spouse’s debt?

Rick Jones, our founding partner, regularly appears on the Danny Bonaduce and Sarah Morning Show, where he addresses family law questions from listeners. A recent caller has concerns about his mother and stepfather. They’ve been legally separated for years but technically remain married. In that time, the husband has built up huge medical bills. Is the caller’s mother liable for those debts?

Related Reading: How Is Debt Dividing During Divorce?

Caller: “My mom is married to my stepfather, they’ve been legally separated for about five years. My concern is that during that time, he’s taken on quite a bit of debt–he’s getting up there in age, he’s had heart procedures. If they’re not legally divorced, is my mom in trouble and on the hook for some financial issues down the road?”

Rick: “Yeah, she very likely is. The concept right now [during a legal separation] is community property, and the rest of the world is assuming they’re still creating community property. Your common sense is right, I’m glad you called.

“So that’s something hopefully they can agree on that’s part of the document.

“Now, the only downside still, is there are things, for example, if he’s been able to purchase property, her signature is likely to be on there somewhere. There are some debts that have already been secured, the lender, in that case, thinks they’ve got access to not only your stepfather but to your mother.

“So the real question is whether or not any of these debts out there are going to be aggressive in their collection as well?”

** A note about lenders: The most important thing to remember about debt and divorce is that neither credit card companies or lenders ARE NOT bound by divorce agreements. The court doesn’t focus on who accrued the debt. Restraining Orders are often used as a safeguard to prevent your spouse from depleting assets while going through a divorce.

Related Reading: My Ex Agreed to Pay Off Shared Debt but Declared Bankruptcy Instead