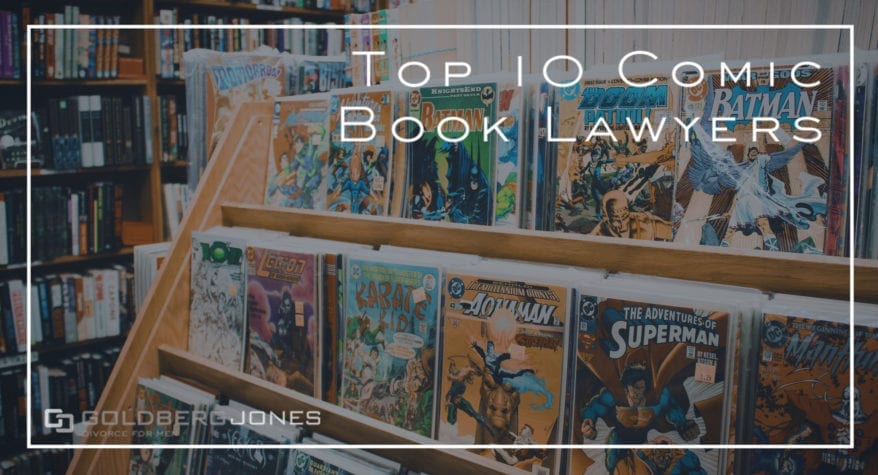 If you’ve paid attention to popular culture during recent years, you know San Diego Comic-Con has become a phenomenon. A juggernaut that extends far beyond the realm of comic books to encompass movies, TV, and all things entertainment.

As you might imagine, the 2020 edition looks a bit different from most years thanks to COVID-19. This year we’re talking about [email protected]. Instead of waiting in line for hours outside of Hall H, they’re staging virtual panels, remote watch parties, and similar socially responsible events.

Sure, it’s not the same as rubbing elbows with tens-of-thousands of like-minded people. Still, it remains a celebration of the nerdy, geeky, and awesome.

With all of this on our minds, we thought we’d take a look a the greatest comic book lawyers of all time.

Given our chosen profession, it’s a safe bet that when it comes to the pages of comic books, some of our favorite characters also happen to be lawyers. Granted, the attorney gig is often a day job, a cover story to conceal other pursuits — usually in the vigilante crime-fighting realm — but we’ll take what we can get.

As San Diego Comic-Con gears up for another massive year, we thought we’d run through a list of our ten favorite comic book characters who also happen to practice law. 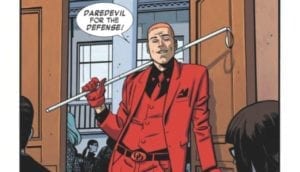 When not in the trenches protecting the Big Apple from the criminal enterprises of villains like the Kingpin and Bullseye, Murdock serves justice in another capacity: as an attorney.

Blinded by radioactive waste as a child, Matt’s other senses are heightened, giving him a radar-like perception that allows him to see without really seeing. After mobsters murder his father, a journeyman boxer, for refusing to throw a match, Matt dedicates himself to fighting the good fight and protecting those upon whom the underworld preys. With two seasons of his successful Netflix show under his belt, and more adventures on the way, Daredevil is easily the highest-profile comic book lawyer

The law firm of Nelson and Murdock is well represented on this list. Sidekicks are commonplace in the pages of comic books. While Daredevil doesn’t have one, his day-job identity, Matt Murdock, does. This takes the form of his BFF and business partner, Franklin “Foggy” Nelson. 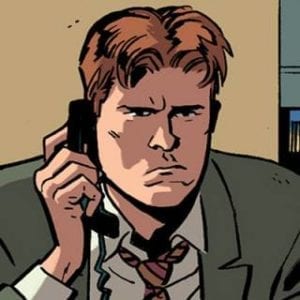 With no superhero persona to speak of, Foggy’s everyman status serves as a counterbalance to his partner’s nocturnal endeavors. It’s rare that Foggy shows up to court in the morning with broken ribs from fighting goons or ninjas. But even without superpowers or a secret identity, he’s still one hell of an attorney.

Since first showing up on the scene in 1964, Foggy has undergone a number of transformations. He’s been drawn as a slim, good-looking man, but also, especially in recent years, as a short, pudgy contrast to Matt’s tall, chiseled handsomeness. Though he’s often relegated to a comedy relief role, Foggy clashes with Matt on a regular basis and the two have been rivals as well as partners. Especially when it comes to the affections of romantic interest Karen Page. 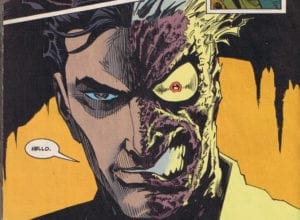 Though he started out as a crusading young district attorney with an eye on taking out organized crime in Gotham City, Harvey Dent ultimately becomes the villainous Two-Face, one of Batman’s greatest antagonists.

Depending on the iteration of the DC character, Harvey struggles with mental illnesses like bipolar disorder and schizophrenia. He acquired his trademark coin from his father, who flipped it in a sadistic game to decide whether or not he would beat the child.

When gangsters threw acid in the adult Harvey’s face, this lifetime of duality split his psyche and Two-Face was born. Outside of the Joker, Two-Face is one of Batman’s most intriguing foes and has been portrayed numerous times in movies and on TV by a variety of actors.

Not strictly speaking a comic book lawyer, 2000 AD’s Judge Dredd does fill a number of legal roles on the printed page. 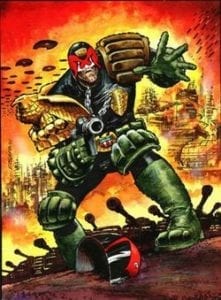 Chief among these are the trifecta of judge, jury, and executioner; a microcosm of the judicial system embodied in a single character.

In the dystopian future mega-tropolis, Mega-City One, which encompasses the entire Eastern seaboard, Street Judges such as Dredd are tasked to arrest, judge, sentence, and punish criminals.

Created by John Wagner and Carlos Ezquerra, Judge Dredd first appeared in 1977. The character’s face is never shown in the comics. According to Wagner, this is to represent the “facelessness of justice.” Fans did see his face, played by Sylvester Stallone, in the 1995 movie of the same name.

Though the most recent and most faithful cinematic adaptation, 2012’s Dredd, all that we see of star Karl Urban are his scowl and stern, severe jawline as he tears through densely populated City Blocks.

The most famous Hulk is obviously Bruce Banner’s Incredible Hulk, but he’s not the only member of this family tree. Unlike her counterpart, when Jennifer Walters Hulks out, she doesn’t lose control entirely. 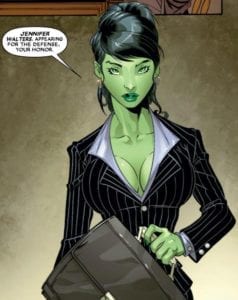 A cousin of Banner’s, Walters received an emergency blood transfusion from her relative, which resulted in a milder version of his condition. Instead of losing it in a frenzied roid rage blackout, she retains her intellect and personality.

And it just so happens her civilian persona is a highly skilled comic book lawyer. So, not only is She-Hulk super strong and green, but she’s also an asset in court. Since showing up in 1980, she’s served with the Avengers, the Fantastic Four, the Defenders, S.H.I.E.L.D., and other teams, and has worked as legal counsel for a who’s who of superheroes. Whether in the courtroom or on the streets, She-Hulk isn’t a bad character to have in your corner.

Dick Grayson is best known as the civilian alter-ego of Batman’s sidekick, Robin, the Boy Wonder, and Bruce Wayne’s legal ward. Not the only one to wear the Robin mantle, he is certainly the most famous. 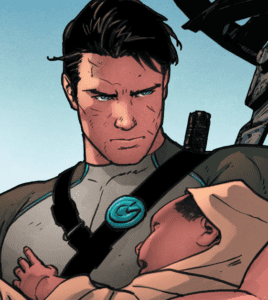 His origin story is that he’s the youngest child in a family of acrobats who fall victim to criminal forces extorting money from the circus where the Flying Graysons perform. But did you also know that in one iteration he becomes an attorney?

Earth-Two is DC’s parallel world established as the home for the publisher’s Golden Age characters. In this realm, Dick continued using the Robin persona well into adulthood, having no successors.

He never adopts later monikers like Nightwing and never takes over as Batman. In addition to his vigilante lifestyle, he also becomes an attorney. Given his proclivity for justice, comic book lawyer is a fitting career move.

Over the years, the title Manhunter has been worn by a number of different characters in the DC Comics universe, and at least two of them have been practicing attorneys. Mark Shaw was a public defender who became disillusioned watching criminals manipulate the system and escape without punishment. 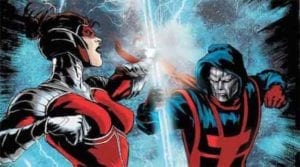 Through his uncle, he meets an ancient crime fighting faction called the Manhunters. He assumes the Manhunter identity from a previous incarnation and dives deep into an often dubious vigilante lifestyle.

Like Mark Shaw, Kate Spencer is also an attorney, though on the other team, serving as a prosecutor. Enraged by the ability of super criminals to evade facing justice for their actions, she assembles a heroic get up of her own using tools and weapons cobbled together from other heroes and villains. Using their respective powers, she becomes the sixth version of Manhunter.

Despite tussling with scoundrels and baddies in a more hand-to-hand capacity, Kate Spencer never completely abandoned the courtroom. At one point she defended Wonder Woman and even went on to fill the District Attorney position once held by Harvey Dent in Gotham City. A solid legal resume for a comic book lawyer.

With a name like Two-Gun Kid, you may expect a shoot-first-ask-questions-later type of frontier gunslinger, not a skilled litigator.

Matt Hawk (also known as Matt Hawkins and Matt Liebowitz at various points over his history) was a Boston lawyer inspired by a fictional hero to fight crime in the American Wild West.

After training as a gunfighter, he adopted the moniker Two-Gun Kid and headed to the frontier to dispense justice.

Over the years, the Two-Gun Kid has had any number of adventures. He’s teamed up with fellow frontier heroes like Kid Colt, the Rawhide Kid, and the Phantom Rider, but his exploits aren’t limited to the Old West.

He’s tangled with aliens and supervillains, and in one arc, he even traveled through time to the present day to join Earth’s Mightiest Heroes, the Avengers.

Like many of these heroes, DC’s Vigilante is an identity that has been worn by many individuals over the years.

Though the character has been around since 1941, New York City district attorney Adrian Chase took over the costume in 1983.

Like many of his comic book counterparts, Chase was pushed towards outside-the-law actions after a tragedy. In this case, the mob killed his entire family and pushed him to extreme measures.

Initially, he took pains to make sure that no one died as a result of his actions, using non-lethal weapons and means. Over time, however, he became less and less concerned with life, death, and collateral damage. His initial internal conflict over the loss of life gave way to a darker, hardened exterior before he ultimately committed suicide.

When you think of comic book heroes, you probably picture a masked character skulking around, fighting crime. While there is a long history in this realm, the line had to start somewhere. 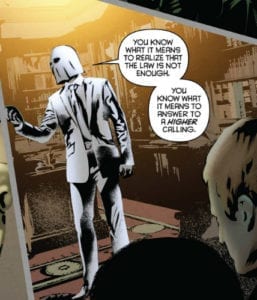 As far as American comics go, it began in 1936 with The Clock. Regarded as the first masked hero, Brian O’Brien was a street-level vigilante, one without any inherent superpowers.

He also had a number of traits that will be familiar to modern comic book enthusiasts. He had a secret underground lair and used a mask to conceal his identity.

To fight crime, he employed a variety of ingenious gadgets and gizmos, like a cane that fired projectiles or a diamond pin that doubled as a tear gas delivery system. Though he was also a comic book lawyer, he gave it up to become a member of high society. It worked out well for him as he even became the President of the United States in one continuity.