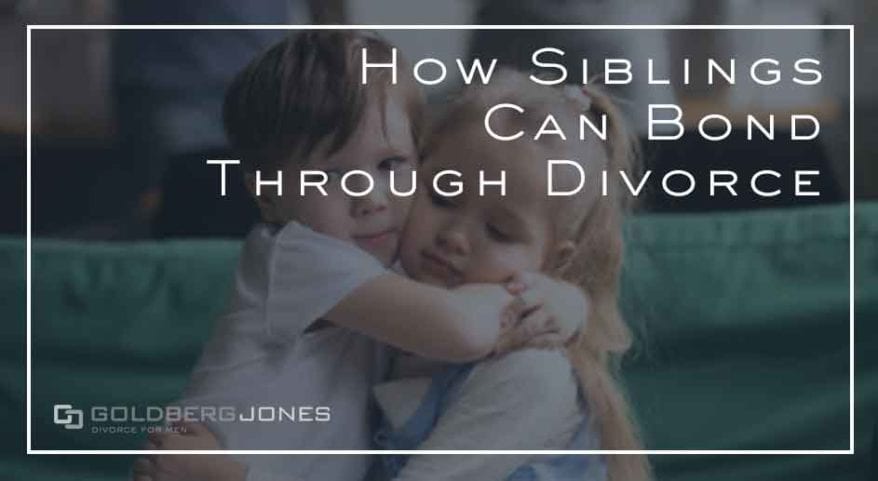 Divorce is a tough, traumatic experience. It’s especially difficult for children to watch their parents fight and split up. Sometimes, however, from this painful experience, siblings in divorce create something positive, using this shared situation to deepen their bond.

In a story in the New York Times, writer Ellen Umansky shared a funny, poignant tale about how she and her brother became much closer as a result of their parents’ divorce.

It begins with a humorous anecdote. A friend asks how she can get her daughters to be as close as Umansky and her brother. The author replies, “You and your husband should separate, then go through an ugly divorce. That’ll bring your kids together.”

Part joke, part snark, there is, as Umansky goes on to explain, a current of truth beneath the surface. She recounts how their parents’ divorce, the subsequent conflict, and the shuttling back and forth, created a tight, unbreakable bond between her and her brother; one much tighter than normal.

They relied on each other to deal with the trauma, and they continue to rely on each other for support to this day. This is a common coping mechanism for siblings in divorce. And one that seems natural—why wouldn’t children lean on those closest to them for support in a time of great stress?

Related Reading: How Child Custody Has Changed Over Time

While Umansky’s story is anecdotal in nature, many other narratives share striking similarities.

Writing in the Huffington Post, Judith Wallerstein, author of the landmark 2001 study, The Unexpected Legacy of Divorce, recounts a number of parallels tales. Wallerstein interviewed 131 subjects, all siblings whose parents had gone through a divorce, checking in every five years for 25 years following the parental split.

In the wake of divorce, kids contend with a variety of pressures, trials, and hardships.

All of these elements serve to isolate children. Which is why sibling relationships are often so vital during and after divorce and child custody cases.

In rapidly changing circumstances, brothers and sisters are often the one constant. They’re the only other person who knows exactly what a child is going through because they’re going through the same thing. Siblings often cling to each other because of this.

Wallerstein notes that such turbulent times often strengthened the bond between siblings. And as they aged, many in her study reported those bonds remained intact through the years. Even as the siblings moved into adulthood, went their separate ways, and built their own lives, an unwavering closeness persisted.

The Power of the Sibling Relationship

Another study, from Smith College in Massachusetts, examines what it calls “The Power of the Sibling Relationship.” The researchers aim to shed light on one of the least studied familial relationships and how “siblings may play in one another’s lives when coping with the stressful effects of parental divorce.”

Through interviews with pairs of now-adult siblings whose parents divorced when they were children, the study looks at how they helped each other survive. Their findings reflect both positive and negative impacts of sibling relationships following divorce.

Positive Impact Of Siblings In Divorce

One common theme from the discussions with the participants confirms that the sibling relationship had a positive influence on the individual’s ability to cope with divorce. In these cases, a number of consistent points emerged.

Related Reading: 5 Missteps That Can Harm Your Custody Case

Negative Impact Of Siblings In Divorce

While this study found many positive effects of siblings in divorce, not every situation was so rosy. A complex, emotional time, not everyone responds the same way to their parents splitting up. According to the study:

“All of [the participants] felt that their sibling had had a positive impact before and during the separation process but that this was followed by a negative impact immediately following the divorce, attributing it to the complexity, chaos, and stress of the divorce.”

Many factors play into this negative swing. In some cases, they caused lasting damage to the relationship between siblings in divorce and for years to come.

Related Reading: She Wants to Move My Kid Out of State, Can She?

Divorce leaves a lasting impression on children. Down the road, it can lead to feelings that all relationships, no matter how healthy, are doomed, issues with commitment, and other issues.

Siblings in divorce have their own unique experiences. Going through a turbulent, emotional time often leads to strong, enduring bonds that last a lifetime, beyond even normal sibling relationships.

Since children are so impressionable, it’s vital that parents are mindful of the effects divorce has on siblings. You’re going through a tough time, no one denies that. But so are they.

Take steps to ensure their health and wellbeing, whether we’re talking about siblings or only children. Communicate with them, continue to spend time together, and let them know how important they are.

Related Reading: Building a Custody Case Against an Abusive Spouse