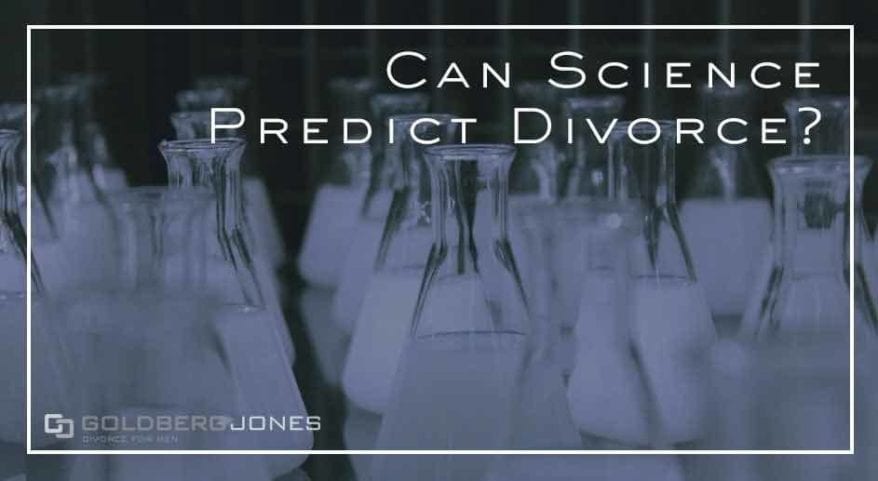 Many factors contribute to divorce. By the time you get to the point where you consider ending your marriage, you likely notice all kinds of problems. Sometimes we see friends, family members, and acquaintances heading for a metaphorical cliff even when they can’t.

Is it possible to predict divorce?

The answer is probably not. There are, however, certain factors that indicate one union is less likely to find success than another. Business Insider magazine collected seven common factors that often predict divorce based on research, statistics, and science. They run the gamut from money to domestic situations to age and beyond.

Just because you check off one or more of these boxes, doesn’t automatically mean you’re doomed to divorce. It simply means that statistically speaking, you’re more likely to head down that road. It also doesn’t mean there aren’t other potential warning signs.

In reality, these are just a few of many factors that may potentially impact a marriage. There are also plenty of instances where they don’t. Just like there are countless other pieces that go into building a life with another person. Are they worth being aware of? Definitely. Should you fixate on them? Probably not.

Timing may really be everything. Tying the knot either too young or too old may have a disastrous impact on the resulting marriage. According to research, couples who wed either as teens or in their mid-30s have a greater chance of divorce than those in their mid-20s.

Perhaps those on the younger end of the spectrum rush into a situation they’re not fully prepared for. On the other hand, the average age of a first divorce is 30. People in their mid-30s may also dive into a second marriage too soon. Or, if they’re not already married, they may feel pressure from family, friends, and society at large, not to mention the dreaded biological clock.

We all know money, employment, and careers often exert great pressure on a marriage. One recent study determined that couples where the husband doesn’t have a full-time job are more likely to divorce in the next year than those where he does. The former couples have a 3.3% chance of divorce, while the latter have a 2.5% chance. Not a huge discrepancy, but noteworthy.

From the other side, a wife’s employment doesn’t present a substantial influence. According to the researchers, this indicates that some traditional gender roles still flourish.

Education is another factor research often cites as influencing whether or not a couple will divorce. In general, the more education, the more stability you find in marriage. More than half of marriages between people who drop out of high school end in divorce, compared to roughly 30% of those between college graduates.

Again, this often boils down to money issues and stress over finances. It’s not a 100% correlation, but education commonly predicts financial success. And money may not necessarily buy happiness, but constantly worrying about paying the bills causes problems.

Contempt of court often pops up in divorce proceedings, but showing contempt for your spouse is something else entirely. When one spouse considers the other beneath them, one psychologist calls this the “kiss of death.”

This makes a great deal of sense. If you view your spouse as inferior, or your partner doesn’t respect you, that’s not the best foundation for building a strong marriage. Whatever issues or resentments you have will, most likely, eventually bubble to the surface. Or if your spouse feels constant disapproval and scorn, that’s probably going to emerge at some point.

Affection is good. Affection is healthy. It’s often a sign of a strong, happy relationship. Couples who never show affection have their own issues. That said, if you can’t keep your hands off each other, that may also present issues down the road. One research paper found that couples who start off hot and heavy are more likely to divorce than those less outwardly affectionate.

The underlying reason for this is that couples who are all over each other early have problems maintaining that level of intensity. When you peak early, there’s often a much sharper decline. Couples with a steady, consistent level of affection over the long term stand a much better chance of staying together.

Conflict is part of marriage. You’re going to fight, that’s just the nature of spending that much time with another person. But as it turns out, how you fight, or at least how you respond to conflict, indicates your likelihood of divorce. Research shows that when one spouse withdraws or shuts down in these difficult moments, couples are more prone to divorce.

Again, conflict, disagreements, and tough talks go with the territory. Dealing with them is part of a relationship. When one partner refuses to engage or participate, this often leads to issues and unhappiness. Keeping your mouth shut may work in certain circumstances, but staying quiet is not an effective long-term strategy for conflict management.

If you recognize one or more of these characteristics in your own situation, that doesn’t mean you’re destined for divorce. Two distinct people make up every marriage and no two relationships are ever the same. What dooms one couple may have no impact on another. You may statistically be more inclined to divorce, but that’s not the only potential outcome.

More than anything, these are interesting facts that present a different perspective on marriage. Should you notice them? Definitely. In many cases, recognizing these may give you the chance to fix your marriage. But they’re not worth dwelling on. Whether or not they damage your marriage depends on you and your spouse.