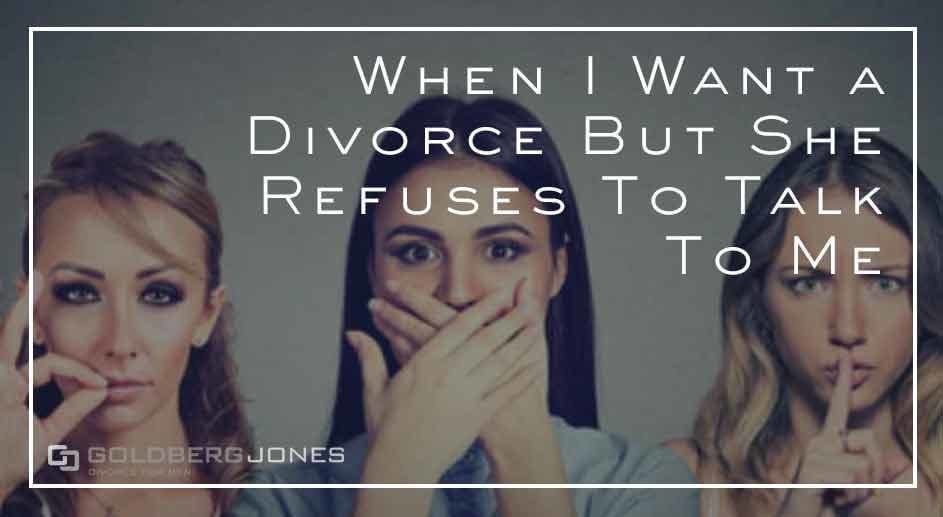 Unless you have a remarkably amicable split, divorce is tough, even in the best of times. It requires a great deal of communication and information flowing back and forth. But what happens when you want to end your marriage but your spouse refuses to talk to you about divorce?

On a monthly basis, our managing partner, Rick Jones, drops by the Danny Bonaduce and Sarah Morning Show to answer listener questions about divorce, custody, and other family law matters. During the latest visit, one caller posed this exact question.

“I informed my wife about my desire to end our relationship and I want to start the separation process. She refuses to talk to me, she believes I am trying to pressure her to negotiate things while we’re still married. I would like to move out of the house because things are hostile.  Is it better to file for divorce while we are both physically under the same roof?”

“You know it’s really going to be circumstantial on that, you’ll hear from me a lot, and I’m sure you have over the years where I say, “don’t move out” if custody is an issue. If you’ve got kids in the house. [Sara interjects “Which he does”].

“Because during a case–it can literally last a year plus–what happens, is that there’s often temporary orders the court rules in the case, and these temporary orders are very likely to reflect what the ‘status quo’ is.

“So here’s somebody that with all good intentions wanted to turn the heat down, take some of the animosity away, and the reality is, the door may be shut for him for the entire pendency of the case. And good luck getting back in.”

Danny: “I thought you literally meant touch the thermostat because actually, that’s still a thing with my wife. I look at her and I say, “hey, old = cold” I’m way older than you, I’m cold all the time. But in a house when you’re getting a divorce from, it’s a thing, like, who’s going to set what temperature is, not only in the divorce, but in your actual living rooms.

“I think it’s fraught with perils to stay in the house, but you need to listen to Rick Jones on this and make it sure you don’t come off looking like the person that abandoned the house and also the kids.”

Other Person: “Hey Rick, do both parties have equal right to be in the house, or is there a way for one to kick the other one out?”

Rick: “Before you get to a court ruling, of course, both parties have equal access to the home. When you get into a judge or a court making a ruling, there’s really two ways, one that happens unfortunately in our community, is domestic violence allegations.

“So somebody can try and seek a protection order, and if the courts grant a temporary protection order, then that other person is booted out for 10 days. They get the opportunity to come back and tell their story, but that’s a huge advantage in a case when they’re out already 10 days.“

Danny: “How often is that used as a tool? I’m just going to say, ‘domestic violence’.”

Rick: “That’s a tough one. I don’t want to minimize the real issue of domestic violence, so I want to underscore that. That said, in our experience firm-wide, we absolutely have seen opportunistic use, or circumstances where it’s used as a litigation tool.”