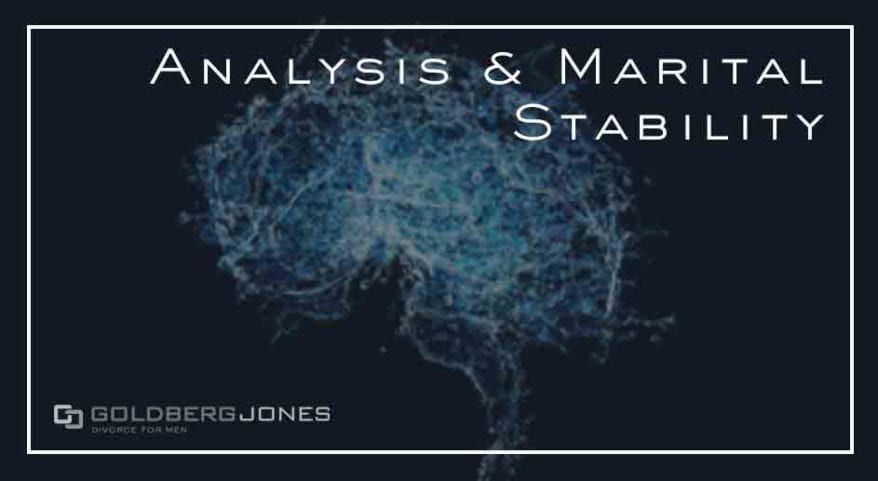 Relationships crumble for any number of reasons, from infidelity to abuse to two people simply not getting along. A recent study out of Australia, where one-third of marriages end in divorce, digs into the factors that lead to marital stability.

Using numbers from seven waves of the Household, Income and Labor Dynamics in Australia survey, otherwise known as HILDA, this study from the Australian National University traces 2,482 married couples over six years.

Analyzing the data, they look at the individual characteristics of husbands and wives to see which are most associated with marital stability. They then glance at whether or not unions between similar or dissimilar partners have a better chance of success.

This is dense, heady stuff to be sure, but the results present an interesting look into underlying causes behind divorce and separation. Through examining the data and crunching the numbers, the research team identified four main categories associated with marital instability that can lead to the dissolution of marriage.

Different ethnic and racial backgrounds. Various levels of education. Distinct religious beliefs. Stances on alcohol and cigarette consumption. Even preferences for number of children. These all seem like potential marital powder kegs waiting to explode.

The data reflects that a number of these variables do impact marital instability. Others, perhaps surprisingly, don’t figure in as much as you may expect.

In this data sample, a large age gap between spouses influences marital stability. This can go both ways, and either the husband or wife being significantly older than the other can cause problems.

Different levels of education, desire for children, and even alcohol consumption all appear to impact the relative strength of a marriage—couples where the wife drinks more than the husband are two-thirds more likely to separate.

Other factors you might anticipate playing a part in shaking a marriage, however, aren’t always as significant. Neither country of birth nor a difference in religious preferences prove to be noteworthy marital detriments.

Couples who both smoke showed no signs of increased likelihood of separation, though when only one spouse smokes, those numbers spike.

You may very well expect that overall satisfaction with a relationship has a substantial relationship with marital instability. It may sound obvious that couples where both parties get what they want and need out of a marriage are less likely to split up, and the HILDA data supports this.

The examination of the numbers showed that couples where the husband is dissatisfied, but the wife is satisfied, are less likely to separate than one where the positions are swapped. A marriage made up of a contented husband but an unhappy wife is significantly more likely to end in divorce than the other way around.

In one form or another, most of us are well aware of how stressful money issues can be in a relationship. Income, employment status, and more can contribute greatly to the stability or instability of a marriage. Couples with a higher total household income are at a reduced risk for a split.

While a wife’s employment status is not shown to be a significant component to divorce, separation, or stability, a husband’s, on the other hand, can play a substantial role in marital discord. If a husband is unemployed, the risk of a marital rift more than triples.

The length of a marriage. Whether or not the spouses are themselves children of divorce. The age at which the two parties married. If a couple lived together first, any previous children. Whether or not this is a first marriage. All of thes may all factor into marital instability. Though some play more of a role than others.

When one or both sets of parents divorced or separated, a couple is at an increased risk of following suit. The younger the spouses are when they wed, the higher the chance is that they will eventually split up. If this is a second marriage, or beyond, the chances of a break-up increase, especially if both parties have been married before.

There has been quite a bit of debate on the topic, though according to the HILDA numbers, cohabitation before marriage does not significantly impact the chances of a couple separating down the road. Neither does the age or number of children born to the union. However, couples with children born before the marriage face an amplified probability of a split.

What All Of This Means

While these numbers may be interesting to look at, what exactly do they mean? Is this the way every marriage will play out? If you and your wife have different ideas about kids, is your relationship doomed? Just because your first marriage failed, does that mean your next one will? No, of course not. These are broad statistical patterns gleaned from a wide sample set.

More than anything, looking at these results appears to back up what many think of as common sense. Money problems can cause strain on a marriage. Children can be an issue in a number of different ways.

If you’re not satisfied, it can lead to conflict and strife. These variables, as well as many others, may or may not contribute to the stability, or lack thereof, in your marriage.

Moving forward, it may be beneficial to be aware of the potential impact and pitfalls. Things you may expect to be huge hurdles may not at least mathematically speaking, be a huge deal. On the other hand, elements that may not have appeared as vital can be destabilizing forces. This study simply provides another analytical tool when it comes to looking at marriage, divorce, and family.