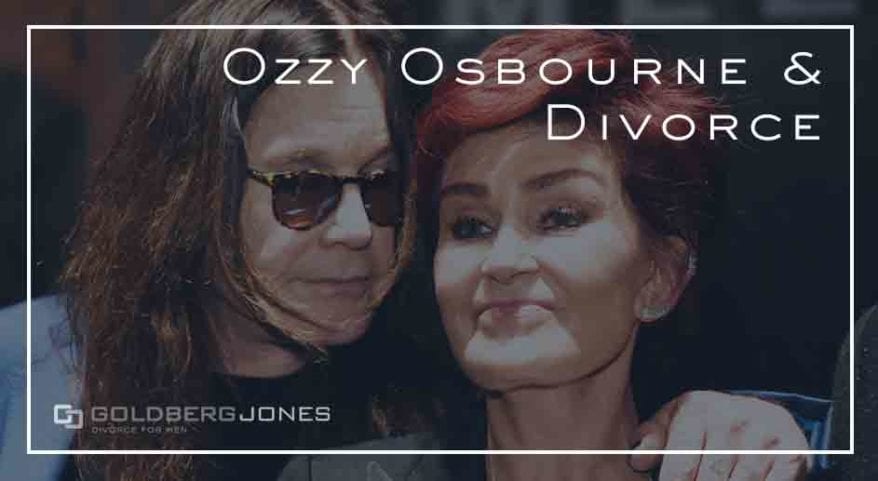 Celebrity marriages seem to come and go with every new round of the 24-hour news cycle. The lengths can be measured in months, or even days in a few cases.

Which is what makes the relationship between heavy metal legend Ozzy Osbourne and his wife, Sharon, such an anomaly on the pop culture landscape; they’ve been married for more than 30 years. That union, however, is apparently Ozzy marriage coming to an end.

Wed in 1982, they withstood mind-bending levels of drug and alcohol abuse, infidelity, the chaos of a rock star lifestyle, cancer, a popular reality show, and so much more.

Amidst this whirlwind of potentially destructive forces, the marriage appeared to survive intact. Sadly, that is no longer the case, but the break-up of a long-term marriage comes with its own unique set of complications.

Divorce after many years has become increasingly common for a number of reasons. As people live longer and remain healthier, there are more chances to lead active, fulfilling lives well into your later years.

There is less social stigma attached to divorce, improved employment opportunities, and people aren’t as likely to stay in an unhealthy, unsatisfying marriage as before. With kids grown and gone, many people don’t see a reason to hang around in a relationship that doesn’t give them what they want or need.

That said, here are some issues to pay special attention to if you’re thinking of getting a divorce after a long-term marriage.

California is a community property state, which means that all assets acquired during the marriage, even those held in one individual’s name, are viewed as belonging equally to both spouses.

This doesn’t mean assets will be divided evenly. The goal is for each party to emerge on a relatively equitable financial footing.

In the case of shorter marriages, it’s easier for the couple to split property up, go their separate ways, and head back to their previous lives, which are still fairly recent. When it comes to longer unions, individual lives may be fading memories as the parties have been together for so long, and this can be trickier.

The longer you’re married, the more your lives become intertwined and inseparable. Lines blur, and it can be difficult to extricate yourself. Spouses can work with each other, with mediators, or with the court to come to an agreement that is fair and balanced for both parties.

There are no set-in-stone rules about awarding spousal support after a long-term marriage. A number of factors come into play when settling on a figure.

The judge may consider

The end goal is to position the supported spouse as close as possible to the standard of living experienced during the marriage. For unions over ten years, the court may not set a termination date for spousal support at the time of the divorce, and payments may continue indefinitely.

One of the biggest changes you’ll experience after the end of a long-term marriage may be in your living situation. Ideally, this will be a positive change, but after years of living with your spouse, the new arrangement may take some getting used to.

If you owned a marital home, you may wind up having to sell the residence. It’s also possible you’ll have to decide who gets to remain in the house and who has to move out.

Most likely, you will already be living apart by this point, so this will hopefully be a mere formality. However it plays out, you may find yourself on your own for the first time in years, and it will be important acclimate to this as soon as you can.

Even if your kids are grown, out of the house, and living on their own, a divorce later in life can significantly alter the family dynamics. Sure, when adult children are involved, there’s no fighting over custody, weekend visitation, child support, or family vacations to the Grand Canyon.

However, holidays, birthdays, and other family gatherings will likely look quite different moving forward.

Even after all of this, you and your ex may still wind up splitting key holidays and celebrations with the kids and grandkids, almost like a custody plan. In some instances, older divorced parents even move in with their children, which is certainly a drastic change for everyone involved.

As you get older, you have probably thought about retirement. Perhaps you have an IRA, 401k, military pension, or some other form of accrued retirement benefit. There’s also social security to take into account. In the case of divorce in California, these are considered community property and can be divided in the final settlement.

Getting closer and closer to the time when you were going to move on from your job, this may have a significant impact on your plans. Perhaps you’ll have to work longer than anticipated, or maybe you won’t be able to fully retire after all. This is a huge factor you will want to take into account and strategize for.