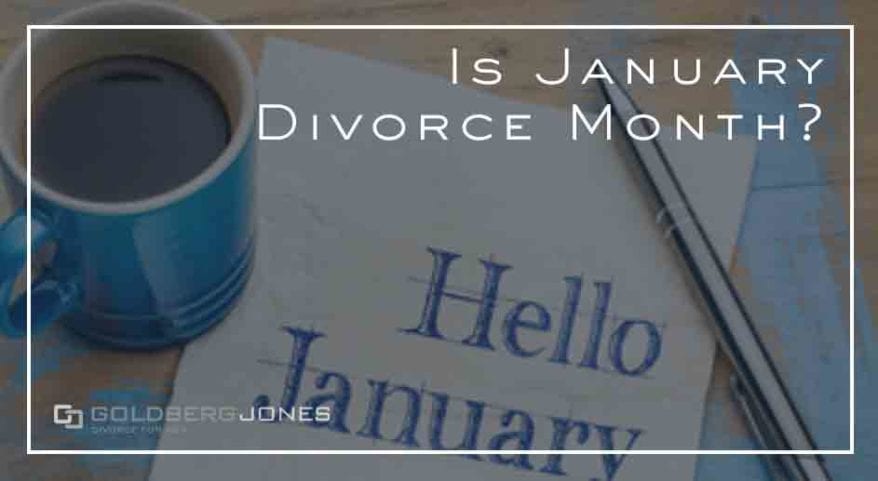 In recent years, January has received an unflattering new nickname: Divorce Month. This is due to an increase in the number of couples who pursue divorce following the New Year. But is it an entirely accurate title?

As is so often the case, the answer to the question of whether or not January truly is Divorce Month is a little bit yes and a little bit no. A recent news report accurately describes it as a time of year when people examine their options for dissolving a marriage.

There are a wide range of reasons why people look into divorce during the first month of the year. Some were putting off a decision they already made. Holidays are busy and hectic.

Often times there’s more family around, the kids are out of school, there’s a lot going on and many don’t want to ruin celebrations and bring down an otherwise festive time. They just aspire to get through the holidays then they can deal with divorce.

In other cases, holidays may be the trigger. All the pressure, all the activity, all the stress often puts additional strain on a relationship. These factors exacerbate an already precarious situation. A big fight during a tense family gathering may simply prove the last straw.

Like in many divorces, various financial concerns often come into play. Holiday spending can be a point of contention. Traveling with the family gets expensive.

And sometimes it’s as simple looking for a fresh start. January is a time when people make resolutions and introduce sweeping change to their lives. Filing for divorce certainly falls into this category. Every divorce is different, and the reasons to end a marriage are as unique as the people involved.

There’s long been anecdotal evidence to support January as Divorce Month. Many family law attorneys note an increase in exploratory calls and new cases after the New Year. More and more in recent years, there’s also a building pile of statistical evidence to back up these observations.

A number of recent studies tackle this subject. One 2016 report from the University of Washington analyzed divorce filings from 2001 through 2015. The findings reveal that the number of divorces does annually rise sharply beginning in January. Examining the data shows a consistent pattern across the 14-year stretch.

Similar to much of the anecdotal evidence supporting Divorce Month, the researchers—a sociology professor and doctoral candidate—cite “culturally sacred” times for this trend. They state that people usually view holidays as a time where it’s “inappropriate, even taboo” to file for divorce. Again, no one wants to be the one who ruins Christmas.

January Isn’t The Only Divorce Month

While January gets all the glory as Divorce Month, that’s not the whole picture. As shown in the UW study, and others, though the rise begins in January, it doesn’t spike annually until March.

The reason for this is relatively simple: divorce is a process, it takes time. A great deal goes into ending a marriage. People explore their options, look to hire divorce lawyers, save money, plan for the kids, establish a support network, and generally create a strategy.

It’s possible to handle straightforward cases quickly. These are usually shorter marriages without children or much shared property. But when it comes to longer marriages with kids and commingled assets, things grow more complicated.

There are documents to collect, discovery to deal with, and a case may wind up in mediation, arbitration, or even go to trial. All of this takes time.

January often serves as the starting line for divorce, as a time to feel out and weigh options. This is when people tend to begin the process. According to reports, online searches for terms like “divorce,” “child custody,” and related family law terms also spike sharply in the first month of the year.

January to March isn’t the only time divorce peaks throughout the year. The numbers reach a similar crest in August after rising through the preceding months.

Much like how the end-of-year season impacts the earlier spike, so too do the summer holidays. From December to March, divorce filings rise an average of 33% annually. The period from July to August also sees a 30% bump.

During this time, kids are out of school, family vacations are common, and many factors come together to crank up the pressure on an already fragile marriage. In this regard, it’s similar to the stress of Thanksgiving, Christmas, and the like.

So, calling January Divorce Month isn’t entirely accurate. At the same time, however, it’s not entirely wrong. More than anything, it serves as a starting point from which couples explore options for ending their marriage. Nor is it the only time of year where this happens. Perhaps the most exact term would be to talk about “divorce seasons” rather than specific months.