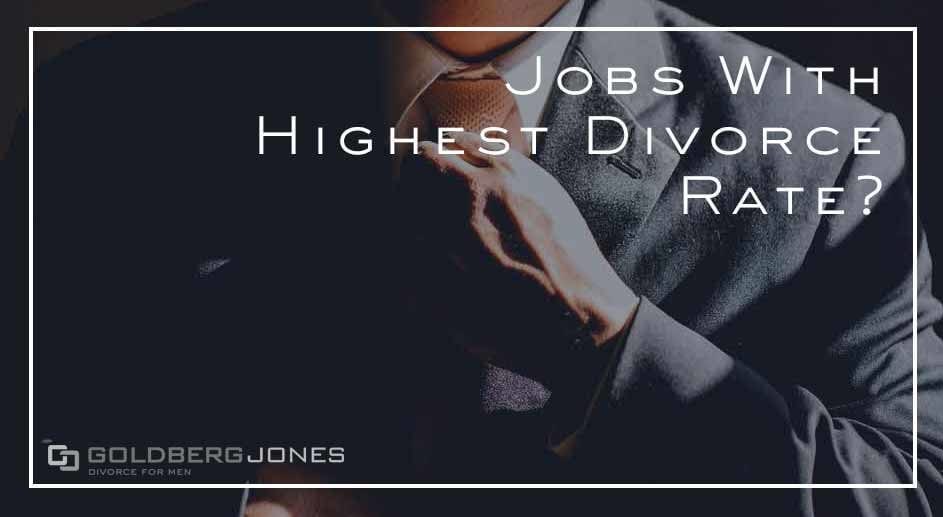 While there may be one major factor that tips the scale—infidelity, money troubles, general incompatibility—divorce rarely has a single cause. In most cases, the real reasons behind the decision to end a marriage are much more complicated. Many things contribute to the decay of a marriage, but jobs often play a big role in filing for divorce.

It makes sense that employment status factors into divorce. After all, money issues and stress over paying bills often cause conflict and strife in relationships. But the type of employment can also have a significant impact on marital stability.

Again, looking at this, it makes a certain degree of sense. Some jobs are more demanding than others, for both individuals and families. Certain professions require long hours away from home, others are emotionally draining, and some simply don’t pay very well. But what jobs have the highest divorce rate?

Which Jobs Have The Highest Divorce Rate?

Career website Zippia recently took a deep dive into the most recent data from the United States Census. Using these numbers, they examined the divorce rate based on particular professions and tried to find which jobs have the highest divorce rate.

The numbers may not represent the entire population. As individuals 30-years-old and under form the site’s core demographic, they focus primarily on that age range. Still, it paints an intriguing portrait of employment and divorce.

Jobs With The Highest Divorce Rates

According to the findings, here are the top fifteen jobs with the highest divorce rate:

Why These Jobs Have The Highest Divorce Rate

Looking at this list, you’ll notice a wide range of careers. There’s everything from technical professions that involve a great deal of training and school, to jobs that require intense physical labor.

Perhaps it’s not surprising to see military careers show up on this list more than once. The reason for that is because military service is difficult. That probably doesn’t surprise anyone. Members of the armed forces spend months, or longer, away from home and family. Being in war changes people and it’s often hard, if not impossible, to readjust to a more normal life.

From the family’s perspective, it also puts them in a difficult situation. Spouses and children deal with long absences, as well as the stress and strain of knowing a loved one is in harm’s way. These careers require a great deal of patience and sacrifice on both sides. Sometimes a marriage simply can’t withstand that pressure.

Corrections officer is another potentially hazardous jobs. Careers in engineering and technical fields are notoriously high in stress and often demand long, intense hours and training. Other fields, especially on an entry level, don’t always offer a high salary. Basically, every trade on this list comes with elements that can add strain to relationships.

So, What Does This Tell Us?

What does this tell us? That some jobs have higher divorce rates than others. Which isn’t particularly shocking. But this doesn’t necessarily mean certain jobs cause divorce. In reality, it’s most likely more about the people involved and the mix of personalities than the actual career.

In the end, jobs are but one piece of the divorce puzzle. They may be a significant contributing factor, but not the root cause. Like most contributors, if and how employment plays a role in ending a marriage depends on the spouses.

There are countless ways that jobs influence relationships and divorce. Low-paying positions may intensify existing friction over money. Careers that demand long hours can make spouses feel abandoned. If one partner hates his or her field, that will likely impact the relationship.

But just because you work in a particular industry, that doesn’t indicate your marriage is doomed. Some people are better suited for one profession over another and thrive in a field where others may not. Many individuals in high-stress or demanding jobs balance their work and private lives just fine. It all hinges on the personalities of those involved and their ability to make it work.