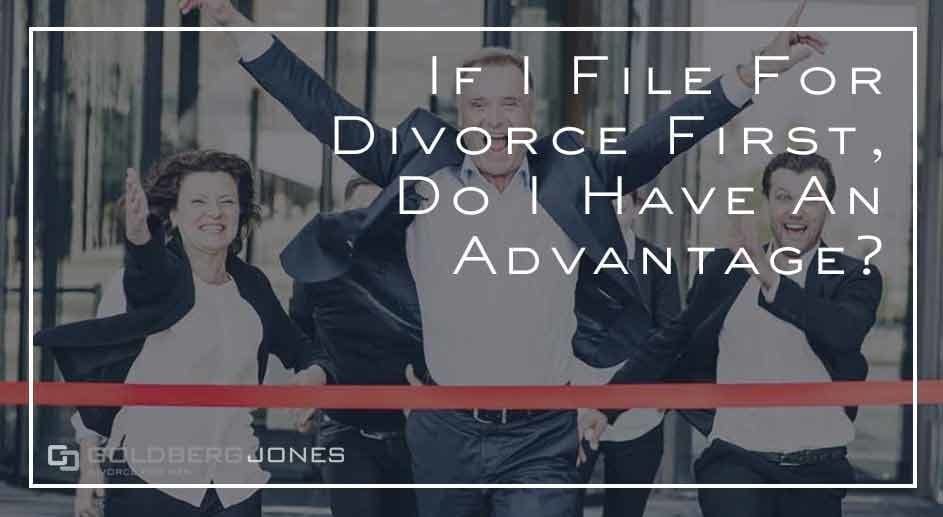 If I file for divorce first, does that give me an advantage in the process? This is a question we hear fairly often. It makes a certain amount of sense, especially as many people view divorce as a competition. So, when you’re the first out of the gate, that means you have the lead, right? Not so fast.

Our managing partner, Rick Jones, regularly appears on the Danny Bonaduce and Sarah Morning Show to answer listener questions. On a recent show, he fielded this exact one.

“I’ve been told several times that whoever files first in a divorce has the upper hand, the distinct advantage, is that true?”

“The quick answer is no. Being the petitioner doesn’t change any of the formality. It doesn’t tell the court that you must be on the right side if you’re the one in there.

BUT, here’s where the more complex and ‘realer’ answer comes. Often times in a divorce, there’s a little bit of an explosion. A need to address some issues at least on a temporary basis right now, the ones that can’t wait a year for that trial to occur.

“So what happens is when you’re the petitioner on the case, you’re also the one filing the motion for temporary orders.

“What that means is, you’ve defined the issues to be addressed in this motion. You served the other party, the other party gets to do a response. Tit for tat, then you get to do a reply. So you get first word and last word. And to me, if I’m an attorney in front of a court, I’d rather have first and last word, right?  So it’s not ‘a winner’ by nature, but at the same time I’d certainly rather be in that position.”

Danny: “On that ‘whosever first to file thing’ thanks for straightening it out.  What about the one I always hear, ‘Whoever leaves the house is never going to get it back?’ Meaning if Amy and I ever get into a huge fight, being the gentleman that I am, will go stay in a seedy motel and she can stay in the house, she’s going to end up owning it because she stayed.”

Rick: “Well that happens all the time too. We talk to people and say ‘DON’T LEAVE THE HOUSE if you have ANY desire to contest for custody.’ Because obviously at that point, you’re out, she’s in, and more importantly, the kids are in.

“Now the house has two issues. One is the issue of residence, so once you’re out you’re going to be out. The second one you hit is ownership. Now the house is still just a piece of property, it has a dollar sign next to it in terms of equity. So it doesn’t necessarily mean you can’t get back in the house in terms of ownership, but you won’t temporarily, as a resident.”