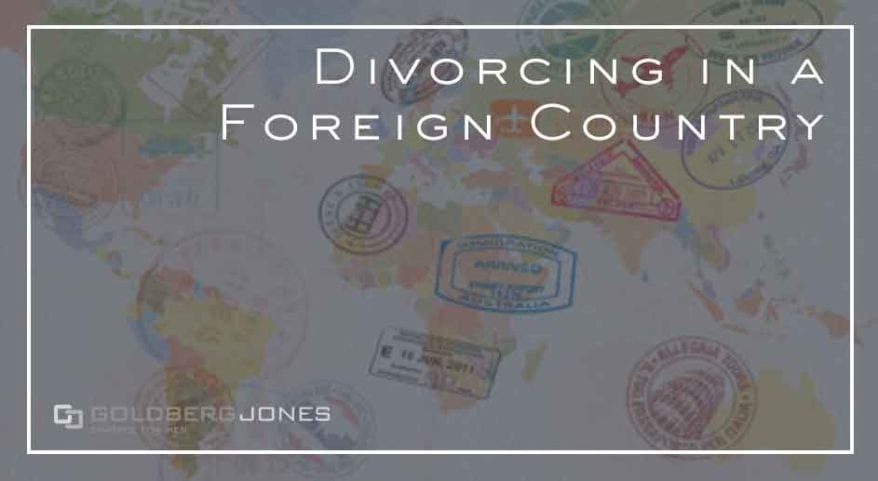 Divorce is complicated enough under the best circumstances. And there are countless factors that pop up and muddle things even further. One that can throw a monkey wrench in the process is if there’s one spouse from a foreign country.

How Does Divorce Work If A Spouse Is In Another Coutry?

In general, it’s not at all uncommon for people to fall in love with someone from another country. Like every other marriage, a lot goes into maintaining that relationship, and they don’t always work out.

That happens. Thousands of marriages end every day. But unlike other situations, divorce comes with a different set of complications when there’s one spouse from a foreign country.

Spouse From A Foreign Country And Residency

When a U.S. citizen marries a non-resident, the government typically grants this individual status as a Conditional Permanent Resident (CPR). This basically gives the foreign-born spouse a two-year temporary pass, though it doesn’t automatically confer citizenship.

Once the two-year period is up, if the marriage is still in one piece, the couple can petition the U.S. Citizenship and Immigration Services (USCIS) for full permanent residence status.

During this time, Immigration will likely check in on a regular basis. They want to ensure this is a real marriage, not merely a ploy to gain citizenship.

Because of this additional scrutiny, it’s important to document your marriage.

When the authorities examine your relationship, if it doesn’t look real, they may not believe it’s authentic.

Divorcing A Spouse From A Foreign Country

If a marriage lasts longer than two years and the spouse from a foreign country gains permanent residence status, subsequent divorces often proceed in a relatively normal fashion, like any other breakup between Americans. However, should a couple decide to divorce before that time, that’s when complications arise.

If a divorce happens with one spouse from a foreign country, where they are along the path to citizenship is important. Again, if the spouse already has full permanent residence, the government won’t revoke that status. It’s when the process is still in progress when things get dicey.

In the case of divorce within two years, upon the dissolution of marriage, the USCIS considers the spouse from a foreign country “out-of-status.”

Basically, this means that person is now unlawfully in the U.S. This situation resembles when a student visa expires. The spouse from a foreign country loses immigrant status and becomes subject to deportation.

Should a couple petition for divorce ahead of the two-year threshold, the spouse from a foreign country must apply for a termination waiver. USCIS form I-751 must be filed prior to the termination of a marriage. What this shows is that both parties entered into the marriage in good faith, again, not just for a quick pass into the country.

In most cases, both spouses must file form I-751 jointly. Divorce isn’t always an amicable process, and cooperation may be difficult to come by. However, the spouse from a foreign country can request a waiver under certain conditions. If the non-citizen shows that:

American citizens can sponsor their significant other for citizenship as an “immediate relative.” An individual who marries a spouse from a foreign country and sponsors their immigration application must submit an affidavit of support.

In this document, the signer accepts the financial responsibility for this other person until they become a citizen.

It’s usually a relative—a husband, wife, child, or other relation—though that’s not a requirement. But that’s a whole different thing and not particularly relevant to a discussion of divorce.

It’s important to know that, if you sponsor your spouse for citizenship, divorce doesn’t automatically end the obligations agreed to on the affidavit of support. It’s a process to retract your patronage, though it is possible.

Divorce involving a spouse from a foreign country gets complicated in short order. And this isn’t even a complete picture, just a snapshot. Not only do you have to deal with divorce laws, but there are also immigration and citizenship issues to take into account.