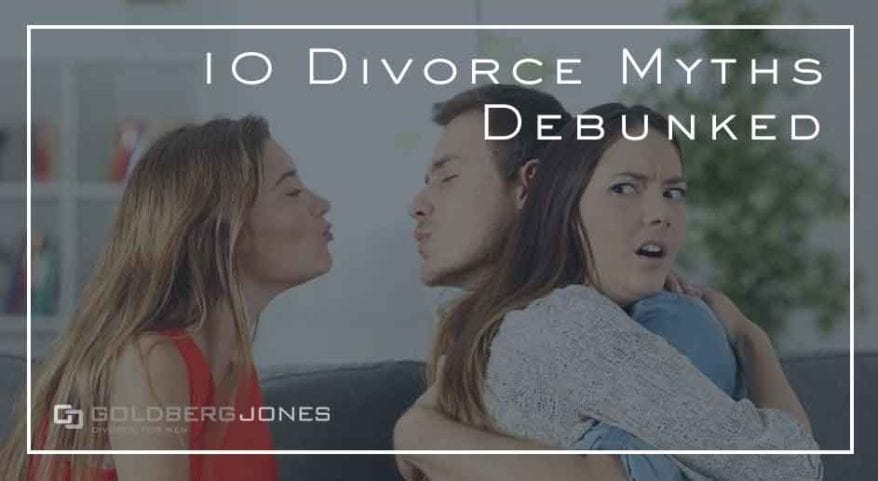 Having an accurate understanding of divorce is an important part of the process. There’s so much information and so many statistics flying around that it’s often difficult to tell what’s real and what’s not. Educating yourself on what to expect is key. With that in mind, we’d like to debunk ten common divorce myths.

1. Adultery Costs You Everything

If one spouse has an affair, the other gets everything, right? You lose the house, the car, the kids, all of it, isn’t that how it goes?

That’s great and dramatic for movies and TV, but that’s not the way things work in the real world. It might end your marriage, but infidelity doesn’t always influence the divorce settlement.

California is a no-fault divorce state, which means there’s no blame assigned for a failed marriage.

Unless adultery negatively impacts your finances, it probably won’t impact the division of property.

One example of how it may is if your spouse drained your savings buying expensive gifts for a side piece. The same goes for child custody. If an affair impairs parenting ability, it may play a role. Otherwise, this is one of the most common divorce myths people accept as fact.

2. You Must Divorce Where You Married

One common divorce myth is that couples must dissolve their marriages in the state where they originally married.

That’s simply not the case. Life rarely remains static. People move for jobs, to be near family, and for countless other reasons. As such, you can file for divorce wherever you live.

If you lived in San Diego county for years, but move to Orange County after splitting up, you have to wait out three months to file for divorce.

On the other hand, if your spouse remains in San Diego, and both parties agree on the venue, you can file there and proceed without waiting.

Related Reading: Jurisdiction and How it Impacts Divorce

That mothers always get custody of children in divorce was taken as a given for years.

Many husbands and fathers feel like they’re at a disadvantage right out of the gate. Though certain biases still exist, the times they are a-changing. More than automatically going with a mother over a father, the court puts the child’s best interests ahead of all other concerns.

Increasingly, the courts recognize the importance of both parents remaining in a child’s life following divorce.

From a legal perspective, mothers and fathers have the exact same rights when it comes to child custody. Each has identical claims. And in an ideal situation—we recognize not every case will be perfect—the parent who represents the best choice, regardless of whether it’s the mother or father, will walk away with custody.

4. Community Property Means An Even Split

California is a community property state. This means the court views all assets and debts acquired during a marriage as belonging equally to both spouses. The law presumes joint ownership.

Many people think this means everything gets shared equally during the division of property. Common divorce myths like this, however, are not the case in most situations.

Many factors go into the division of property. The court’s general goal is for each spouse to emerge from divorce on relatively even footing and to maintain a standard of living similar to that enjoyed during the marriage. The length of a marriage, resources, health, future earning potential, and numerous other elements play into the ultimate divorce settlement.

5. Most Divorces Go to Trial

When you think of divorce, the first image that springs to mind is likely a courtroom setting. There are lawyers in suits, a robed judge behind the bench keeping order with a gavel, heated cross-examinations, and all the trappings.

Again, that makes for great entertainment. Courtroom dramas are a staple of the movie and TV industry for a reason. But that’s also a persistent divorce myth since many, if not most, cases never go to trial

If the two sides reach an agreement, you may never see the inside of a courtroom.

This is most common in simple divorces where there are no children and little shared property, but that’s not all. Through processes like mediation, arbitration, and collaborative divorce, it’s possible for spouses to negotiate and reach a mutually agreeable settlement.

Trials do happen, but the idea that every split leads to a drawn-out courtroom battle is a divorce myth.

Related Reading: What to Expect From Divorce Hearings

6. Your Second Marriage Will Go Better

While many second marriages do work out, statistically speaking, the more times you marry, the higher the likelihood of divorce.

It does help to remember that there are substantially fewer second and third marriages, so the pool is much smaller.

Still, if you get married a fourth time, you may be either a hopeless romantic or a glutton for punishment.

7. Living Together Before Marriage Prevents Divorce

The number of unmarried couples living together is at an all-time high. Many people push back the age at which they marry and test the waters first, and instances of cohabitation have risen steadily over the years.

Couples often use this as a kind of trial run for marriage, to see if they work as a couple before tying the knot.

From the outside, this move makes sense. Living together ensures you’re compatible and can happily share a home. It stands to reasons marriages that begin like this would tend to last longer and be stronger. But that’s wrong. Couples who live together before marriage actually have a higher divorce rate than those who do not.

Related Reading: 7 Things to Do Before Divorce

It’s far too common in troubled marriages for a couple to have a child thinking it will fix all of their problems. Some people presume couples with children have higher rates of marital satisfaction. As with many divorce myths, that’s not the case as often as people think.

The divorce rate of couples with children is slightly lower than for those without, but it isn’t as significant as many believe.

While there is a certain stay-together-for-the-kids mentality in some marriages, having children often increases the overall stress.

One of the most stressful times in a marriage is after the birth of a first child. People learn firsthand the reality of parenthood, money worries intensify, and couples face a number of new pressures. Some relationships simply can’t withstand that added strain.

Related Reading: Marijuana and Custody: Can I Still Smoke Weed?

9. Your Spouse Must Agree To The Divorce

“What if my spouse doesn’t agree to the divorce?” is a common question. People often believe that both parties must consent to end a marriage.

That, however, isn’t true.

The good news is that the government is not going to force anyone to remain married against their will.

Getting your spouse to play ball definitely streamlines the process and makes it easier on everyone, but this is one of many divorce myths and it’s not required to dissolve a marriage.

It’s possible to file the necessary paperwork and start the process. If your spouse doesn’t respond in the given time-frame, you can then file a motion for default. When you’re granted a default judgment, this essentially gives you a divorce on the terms you request because your spouse didn’t object.

Related Reading: Divorce When You Can’t Find Your Spouse

10. You Need A Divorce Lawyer

One of the first things you think of when you think of divorce is probably a divorce lawyer. But it’s not necessary to hire an attorney to dissolve your marriage.

With the advent of online tools and how-to guides, divorce resources are more accessible than ever before. You can download the forms, fill them out, file them, and pay the fees entirely on your own.

Though it’s possible to go this route, it’s not always the best idea. If your spouse has a divorce lawyer, consider hiring one of your own as this puts you at a disadvantage.

DIY divorce works best in cases of shorter marriages with no children and little shared property. The longer and more involved a marriage, the more complicated divorce becomes. It’s often beneficial to have an experienced divorce attorney guide you through the process.

Related Reading: 8 Things You Should never Do During Divorce