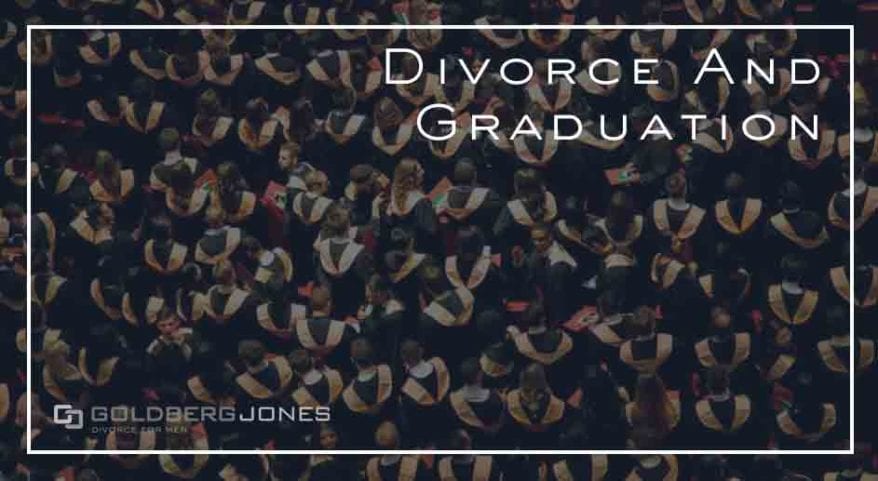 As the end of the school year rapidly approaches, many parents, as well as students, have graduation on the mind. This is a big accomplishment; the culmination of years of work. In short, it’s an occasion well worth celebrating.

But when parents aren’t together, this often becomes tricky, and there’s a great deal to account for when you consider divorce and graduation.

Ideally, you and your ex were able to end your marriage on amicable terms. Or at least good enough that you didn’t put your kids in the middle and you can be in the same place for at least a brief amount of time without erupting into open warfare.

But conflict is often a part of divorce. And with graduations, like with holidays and other gatherings, that can come to a head during get-togethers. Also like other situations, there are ways to cope and minimize the damage.

If you worry you can’t attend your child’s graduation or graduation celebration without fighting with your ex, you may consider sitting it out. That often sounds like a good idea, but it’s generally a mistake. This is an important achievement and a significant milestone. Being there means a great deal.

Divorce and graduation are actually similar in one regard: both mark the end of one chapter in a life and the beginning of another. It’s important to show up and recognize your son or daughter’s accomplishment. It can affirm what they’ve done and give them confidence that you support them moving forward.

Focus On The Kids

Remember, graduation isn’t about you, it’s about them. Unless the circumstances are dire, you can probably put aside petty resentments and lingering bitterness for a few hours.

It may not be entirely comfortable, but it’s usually bearable. If we’re talking about a graduation ceremony, you don’t have to sit with your ex. And as far as parties and celebrations go, take steps to keep contact to a minimum.

You don’t want to put the kids in the middle of the drama going on with you and your ex. Don’t make your children choose between parents. Odds are they’ve already witnessed more than enough conflict in that regard. Hopefully, both parties can agree to be on their best behavior. And if you absolutely must, you can probably find time to fight later on.

Lots of parents celebrate graduation by throwing big parties. Maybe that’s always been your role, but now that you finalized the divorce, there’s more to consider. If your ex plans a get-together, don’t plan a competing one at the same time. Not only does this place your child in an awkward position, it puts other mutual acquaintances in a similar spot.

Some couples end marriages on good enough terms that, especially for events like graduation, they can collaborate and co-host a party. If so, that’s great. But if not, in some instances two parties work. Plan them far enough apart that attending both doesn’t cause the graduate to have to rush or overextend.

Graduation ceremonies usually require tickets. Don’t hog them if there aren’t enough to go around. Share them with your ex; you both deserve to be there and deserve a ticket. There are usually ways to get more, just make sure you take care of that in advance so you don’t have to run around last minute.

By now you probably know just how your ex gets under your skin. The other side of this coin is knowing how to prevent that or avoid it all together. Take precautions to side-step potentially tense interactions. Don’t bring up traditionally sore subjects. It may even serve your best interests to plan an exit strategy just in case.

When you have kids with a person, you almost always maintain at least some connection. Divorce and graduation are often difficult to juggle, but you can do it. This marks a huge milestone, and it’s important to celebrate. Be civil, share photos, don’t start fights, be as gracious as possible, and try to put aside your differences for a moment. It’s better for your children and is likely better for you as well.