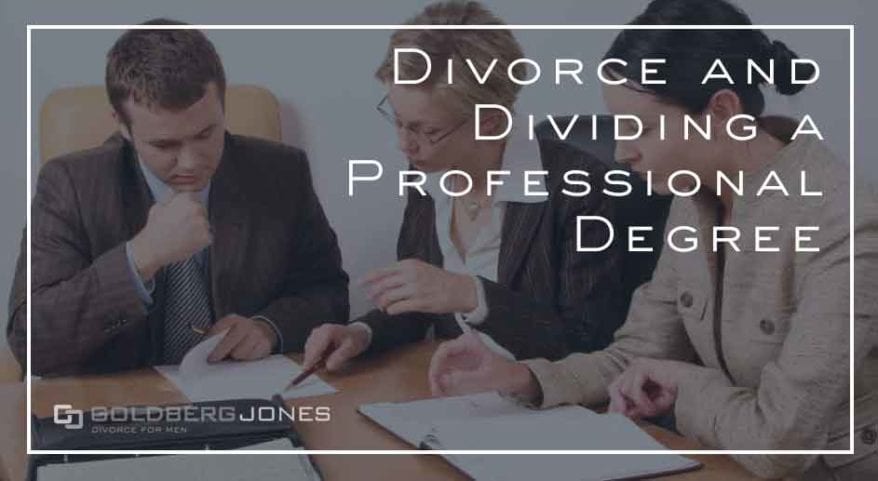 When the time comes to divide marital property it’s safe to assume everything acquired during the marriage will be divided. While tangible assets like the house, cars, and savings accounts don’t come as a surprise, it shocks many people to learn a professional degree wind may up on the negotiating table.

How Can You Divide a Professional Degree?

The division of professional degrees has been presented in divorce courts for more than 50 years. But specific requirements must be met before your soon-to-be-ex can stake a claim to your degree.

Treating a professional degree as the marital property has a long history in the court system. In 1969, the California Court of Appeals published an opinion on professional education as a divisible asset in divorce as it pertained to Todd v. Todd.

In this case, the appellate court held that the education in question was not a divisible asset. Their opinion resulted in no award to the spouse, but that certainly wasn’t the end of the story.

The 1978 case In re Marriage of Horstmann returned a judgment in favor of the non-degreed spouse. In this case, the Iowa Supreme Court considered the future earning potential that would result from holding the degree as a divisible asset —not the degree itself.

They upheld the lower court’s award of an $18,000 property distribution to the non-degreed spouse, This was to compensate her for sacrifices and contributions toward her husband earning the degree.

The debate over advanced degrees as divisible assets gained momentum when a New York judge awarded an ex-husband $155,372–to be paid over 396 months–for his contributions to his ex-wife’s nursing degree.

It’s worthwhile to note that, according to the Wall Street Journal:

“New York is one of only a handful states in the U.S. where a license or professional degree acquired during a marriage is considered property. Its lifetime value is calculated by experts, who can charge up to $30,000 for their services, and then divided as one of the couple’s assets.”

If you earned the degree, why is it considered marital property?

That’s a complicated question. There’s significant variation in how different jurisdictions treat professional degrees. In states like New York, the degree is considered a property that can be valuated and divided.

In other states, the degree itself is not considered property. However, the courts acknowledge the increased earning potential. Subsequently, there are several methods used to equitably divide the value.

Before we tackle the various ways the courts divide the asset, it’s prudent to first discuss how the courts determine ownership. In the United States, there are two approaches to establishing ownership and dividing property. The most common of the two is called equitable distribution. The rest of the states use a community property approach.

If you live in Washington, Wisconsin, Idaho, California, Nevada, New Mexico, Arizona, Texas, or Louisiana, the rules of community property apply. Community property guidelines dictate that all property acquired during the marriage is jointly owned by both spouses.

While both spouses are owners of the property, the division of assets is not guaranteed to be 50/50. The court seeks to split marital assets in such a way that both spouses are equally able to start over.

The origins of community property are grounded in Mexico’s ganancial community system that the U.S. inherited with the annexation of some of the Southwestern states. This is a contributing factor as to why community property states are predominantly in the West —the exception being Wisconsin.

The rest of the country uses equitable distribution. This grants the court authority to distribute marital property in an equitable and just manner.

It is important to note that the courts use a variety of factors when dividing assets regardless of whether you’re in an equitable distribution or community property state. Some of these factors include the length of the marriage, the age and health of the parties, the established standard of living, and the value of homemaking and childcare.

Compensation for a Degree

There are several ways that a spouse might be compensated for contributions toward an advanced degree. Again, jurisdiction dictates how this goes.

In states like New York, an expert can evaluate the degree and associated earning potential, then award a portion of that amount.

However, cases awarding compensation based on projected earnings have been overturned because of the speculative nature of forecasting income.

While an advanced degree has the potential to create increased income and opportunity, it’s not guaranteed. This speculation can come at a high price if the degree-holding spouse’s earnings wind up significantly lower than anticipated.

An example of this occurred in a New York divorce:

“New York doctor named Michael O’Brien filed for divorce, shortly after receiving his medical license. His wife, Loretta, had supported them both while he attended medical school. She claimed a share of the value of his medical license as recompense for her efforts, and in 1985, the Court of Appeals, the state’s highest court, agreed.

“I thought it was a unique interpretation,” her lawyer Albert Emanuelli recalled. “It’s like a debt that you owe and you pay it, just like a mortgage on your house. You can’t fool around.

“Willard DaSilva, Dr. O’Brien’s lawyer during the appeals, still believes the decision was unconstitutional. “It was similar to an indentured servant,” he said. “Dr. O’Brien would have to pursue a career in surgery in order to earn the money to pay for the debt assigned to him by the court, and to force him to do something he really didn’t want to do violated the 13th Amendment.”

In states where the definition of property excludes advanced degrees, the court can still seek to compensate the non-degree-holding spouse. This may manifest as a larger percentage of other marital assets, increased support payments, or a quid pro quo.

A quid pro quo arrangement essentially awards the non-degree holding spouse an opportunity to pursue additional education equal to the opportunity created by their contributions.

What does this mean for you?

Before you troubleshoot worst-case scenarios and ponder a Top Ramen diet, keep in mind that holding an advanced degree doesn’t mean your soon-to-be-ex has any entitlement to it. If you acquired the degree prior to marriage, your spouse has no claim to your degree or future earnings.

Quite frankly, the division of a professional degree is not common in most divorces. However, if you do have questions about how your circumstances will affect your divorce, make sure you speak to an experienced lawyer.