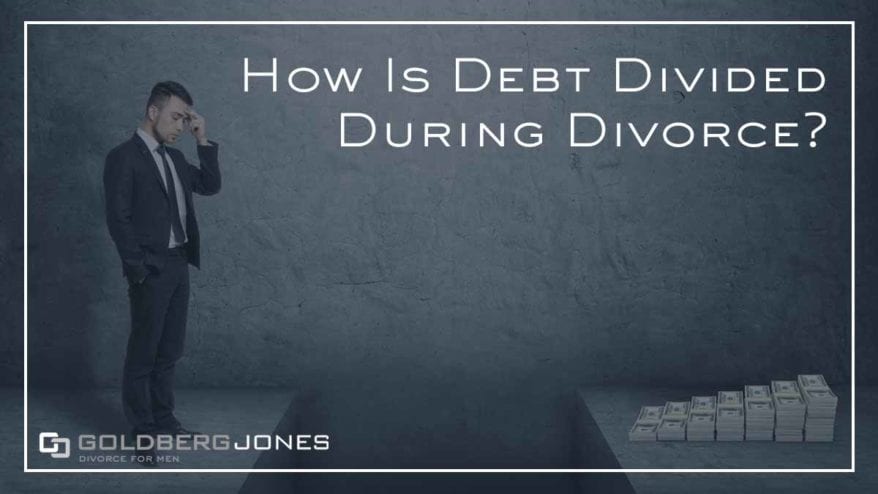 The most important thing to remember about debt and divorce is that neither credit card companies or lenders ARE NOT bound by divorce agreements. The court doesn’t focus on who accrued the debt.

Who’s Responsible For What Debt During Divorce?

The court doesn’t focus on the name on the card or loan. Instead, it treats both spouse’s spending as a single community. If your ex ran up a bunch of bills or took out loans before you separated, even if you had no idea, there aren’t many options and you’ll probably wind up on the hook for at least some of that liability.

If you file for divorce and you have any shared credit card debt with your spouse, in the state of California, you are equally liable for paying it off.

California is a community property state. The courts use a particular standard when splitting up assets, and debts, during the division of property. Under these statutes, the court views most property and liabilities acquired during a marriage as belonging jointly to both parties.

Financial experts highly recommend, if possible, that you pay off and close joint credit accounts before filing for divorce.

You may be responsible for only half the debt if it was incurred for the sake of the marriage but so far as the credit card company is concerned, if your spouse stops paying their court-ordered share, it’s back on you.

Related Reading: Should You File For Bankruptcy or Divorce First?

As with most rules, there are exceptions. The California Family Code makes certain allowances for extraneous spending. Section 2625 states:

“[A]ll separate debts, including those debts incurred by a spouse during marriage and before the date of separation that were not incurred for the benefit of the community, shall be confirmed without offset to the spouse who incurred the debt.”

What this means is that if you can show your ex’s spending was frivolous and not for the “benefit of the community,” you may not wind up responsible.

That said, while from a legal perspective this may be the case, things don’t always go this way in practice. Proving this definitively can be difficult; it’s a hard fight to win.

If you argue a spa day or new clothes are unnecessary and don’t benefit the marriage, she may say that mental health and appearance go hand in hand and are important considerations to the community.

The ultimate decision falls to the court. However, unless your ex embarked on an epic spree of obvious revenge spending, the debt will likely be divvied up between both of you.

Related Reading: We Got Divorced, Why am I Still on the Hook for the Home Loan?

The timing of debt is important. If your ex racked up insane credit card bills before you were married, those stay hers. This also goes for student loans, car payments, and other obligations built up prior to marriage.

According to Family Code section 2621:

“Debts incurred by either spouse before the date of marriage shall be confirmed without offset to the spouse who incurred the debt.”

Related Reading: A Gift or Inheritance and Why that Matters

If your ex had debt before marriage, that stays hers after divorce. Similarly, if your ex builds up a ton of debt after the separation, that’s also her burden to bear. This is a bit trickier and is where the date of separation comes into play.

Once the date of separation is established, that’s it. From that point forward, all income, pensions, retirement benefits, or other assets, or debts, fall to the individual who earned or accrued them.

This looks simple on the surface, but for a long time, it was muddy and vague. For instance, if you were divorcing, but still lived in the same house with your ex for financial reasons or for the kids, that often wouldn’t count. In that scenario, if your ex ran up credit card bills or got a car loan, you might still be liable.

Essentially, you had to live “separate and apart.” However, that changed a few years ago.

Related Reading: How the Date of Separation Impacts Divorce

The key part of this is:

“[T]he conduct of the spouse is consistent with his or her intent to end the marriage.”

In short, you have to act like you’re getting divorced. Though you can still live together, you must proceed as if you’re ending the marriage. You can’t act like you’re married; no holding hands or going on dates. Also, you can’t make efforts to save the marriage, like counseling or therapy. This is the date it’s over, it’s a line in the sand.

A potential hiccup with this new law is when spouses don’t agree on the date of separation. It’s one thing when one of you officially files for divorce. Then there’s an obvious, hard and fast date. Before filing the forms, however, it can appear less definite. Or if your ex claims your behavior was inconsistent with wanting a divorce—perhaps you acted more married than your words indicated.

Related Reading: Does It Matter Who Files First?

Can You Prevent Your Spouse From Accruing More Debt?

If you are having to triage your debt priorities, paying off and shutting down any accounts that can still be drawn from is priority number one.

Keep in mind that if you cancel those joint accounts and put them in your name, you are blocking your spouse from using them, but also taking responsibility for any future spending.

One common use for a Restraining Order is to prevent your spouse from depleting assets while going through a divorce.

The financial agreement is between you and the lender. The court is only a middleman. More specifically, they’re a middleman for whom you have to pay money every time you interact with them.

In addition, if you file for a legal separation, it is very important to file documentation with the court regarding your joint accounts and debt to protect yourself. This can help prevent any bad decisions on the part of your spouse from impacting you.

If you have equity in a jointly owned home, it’s not a bad idea to take a loan against that equity to pay off other accounts, particularly if you are likely to sell the home and split the assets. It’s best to walk away as cleanly as possible for your fresh start. Depending upon how bad your situation is, sometimes bankruptcy is a consideration.

In general, if the debt was accrued during the marriage, you’ll probably have to pay at least some of it.

If it’s from before, that stays with your ex. The same goes for debt built up after the date of separation. So you shouldn’t be on the hook for their post-separation weekend trip to Vegas.

Related Reading: Should You File For Bankruptcy or Divorce First?