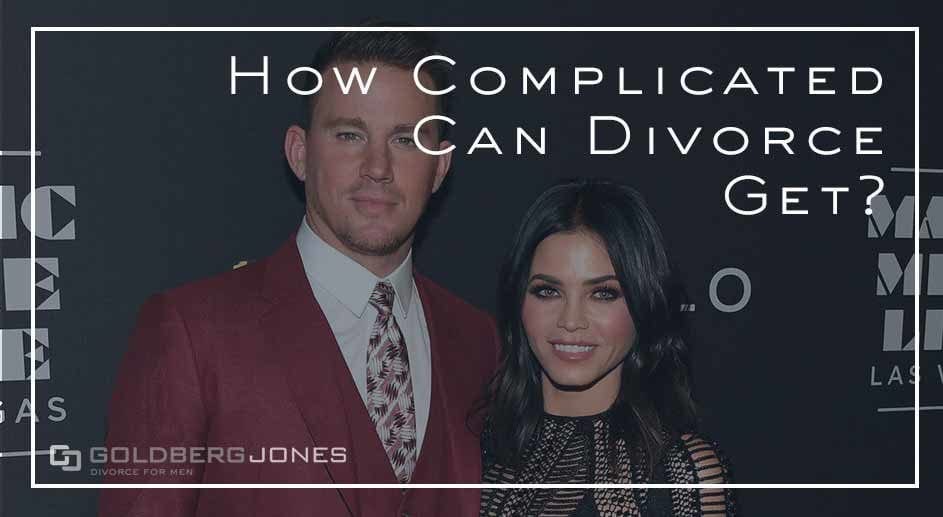 Divorce gets complex. That’s not news to anyone. Two people dividing up the things they acquired over the course of a relationship is rarely simple. But just how complicated can divorce become? One pending celebrity split may illustrate how tangled things can get, even in the best of circumstances.

Famous couples break up all the time. We see a constant stream of them in the magazine headlines as we wait in line at the grocery store. Most of us aren’t famous. Or rich. Or rich and famous. But that doesn’t mean we can’t learn things from these divorces.

Magic Mike star Channing Tatum and dancer/actress Jenna Dewan are divorcing. It’s okay, you can shed a tear if you need. By all accounts, this is an amicable split. There’s no animosity, they’re leaving on good terms, and both remain committed to co-parenting their four-year-old daughter.

Still, despite what looks like a relatively straightforward case, there’s a lot to consider.

What Can Complicate Divorce?

Tatum has an estimated worth of between $60 and $80 million. The couple has houses, bank accounts, cars, and more to divide. The 37-year-old star even has his own brand of vodka.

Most of us aren’t millionaires. Even the most well-off among us isn’t quite that well-off. Still, what we do have remains important to us. Divorce impacts our financial future in a big way. And while high asset divorce, such as this one, may have more to take into account, the law treats them the same way.

California follows community property rules when it comes to the division of property in divorce. This means the courts view all assets acquired during a marriage as belonging equally to both spouses. In community property states, this also applies to debt.

This doesn’t mean you automatically split everything in half. Courts use a fair and equitable standard when making these decisions. They consider the length of the marriage, financial standing, level of need, and more.

One thing we often see in celebrity marriage is a prenuptial agreement. This contract protects people their assets. They take many forms, but they generally lay out, ahead of time, terms of a divorce, should it happen.

Most often this includes how to divide assets, but they can contain other stipulations as well. The perception is they’re primarily for the super rich, but that’s not always the case. They also have applications for the rest of us.

People use them to protect businesses that predate a marriage. If you previously owned a home, a prenuptial agreement can guard against losing it in a complicated divorce. You can employ one if you anticipate receiving a substantial inheritance or family estate. Prenuptial agreements can even provide financial safeguards if one spouse quits a job to stay home and raise kids.

It’s unknown if Tatum and Dewan have a prenup, but theirs presents an interesting situation. When they married, neither was a huge star. Over the years, however, Tatum has become one of the biggest names in Hollywood. Dewan is successful in her own right, but he’s on whole other level. Financially speaking, he has much more to potentially lose in divorce.

One way he could have safeguarded himself against this is with a postnuptial agreement. Similar to a prenup, this is a contract a couple signs after marriage. But again, they also dictate the terms and conditions of a divorce. It’s yet another way to protect yourself in case your marriage doesn’t work.

Many view these contracts as pessimistic, as betting against yourself. It may appear that way, but they also offer an important way to protect what you have. If you own a business, property, or whatever, you can safeguard vital assets in a complicated divorce with this strategy.

Since Tatum and Dewan have a young daughter, child custody is sure to play a role in their divorce. Many people assume mothers always receive custody of their children. Though that’s the perception, as written, the law doesn’t favor one parent over the other.

It’s possible for parents to reach an agreement on their own in this regard. In this case, it does appear the couple remains dedicated to raising their child. But even if they figure out a deal that works for both, a judge has to sign off on a parenting plan.

A parenting plan is the court document that addresses custody issues and lays out the specifics. They stipulate where the child lives, who has decision making power, visitation schedules, and more. Because they determine how much time you spend with your kids, they’re hugely important.

And when there are custody issues involved, there’s also inevitably child support to deal with. After divorce, this is often one of the biggest continuing expenses parents face.

These court-ordered payments cover all of the usual daily expenses of raising a child. This includes food, shelter, clothing, regular medical care, and more.

Other areas of family law are often much more open to interpretation. Unlike those, however, child support follows a rigid mathematical formula. It accounts for the income of both parents, the amount of time you spend with your child, and other financial factors.

In a case like the one we’re talking about, Dewan could do something like claim she looked after their daughter and took care of the household by herself while Tatum was halfway around the world filming a movie. Whether or not that happens, arguments like this, coupled with his higher earnings, could influence child support in a complicated divorce.

Related Reading: What You Need to Know about Child Support Modification

When one partner makes much more money than the other, you often have to contend with spousal support. Much like child support, these payments help ease financial hardships of a dependent spouse after divorce.

Considering Channing Tatum made an estimated $29 million in 2015 alone, it’s a fair bet this will come into play.

Courts look at age, health, the length of a marriage, future earning potential, job prospects, and other factors. Depending on the situation, the payments may only last a short time. In these cases, it’s designed to help one spouse get back on his or her feet. Other times, there may be continuing issues and payments may last indefinitely.

How Complicated Divorce Can Become

These are just some of the significant pieces Channing Tatum and Jenna Dewan have to deal with in their divorce. We’ll likely never know the particulars–they probably employ an army of publicists to keep things private. But these issues aren’t exclusive to celebrity splits. All of these regularly come into play when ending a marriage. Whether the couple is famous or not.

With so much to take into account, divorce can get complicated in a hurry. Even in amicable splits where the couple agrees. All it takes is your ex to decide you need to pay more child support, or that the custody schedule skews too far to one side, and you may wind up in a legal battle.

Emotions run high in divorce. When a case involves money or children, things often get downright nasty. Any number of factors can pop up and cause friction or complications.

Once in place, a divorce settlement is difficult to change. Make sure to do it right the first time. Pay attention to the details. Take the time to consider the terms. Figure out what you want and need out of this situation. Don’t agree to an unfavorable deal simply to get out of a complicated divorce. What you do now has a huge impact going forward. Consider hiring a lawyer, or at least having an attorney look over your paperwork before you sign.