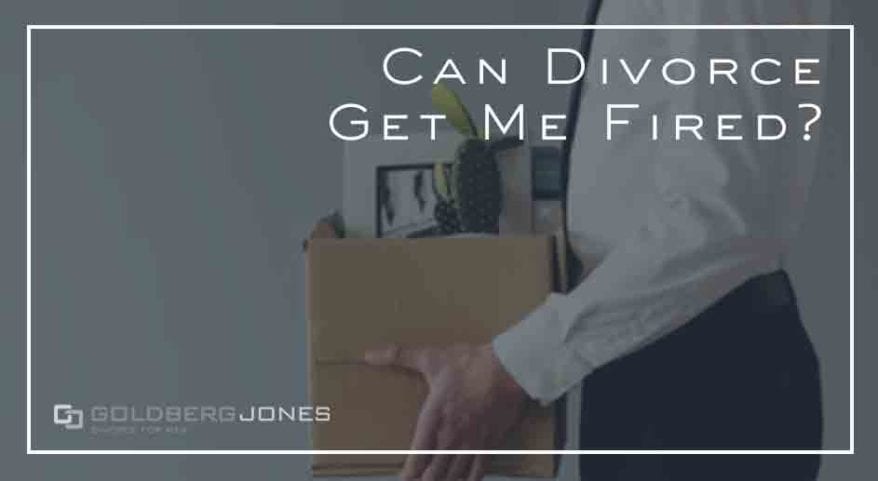 What we do outside of the office can have a big impact on our work. Even though we try not to, we often bring the weight of our home lives with us to the day job. It seems like weekly we hear about a person getting canned for using poor judgment, or no judgment as the case may be, on social media. But what about divorce that turns nasty? Can an ugly divorce get you fired?

Can an ugly divorce get you fired?

Divorce is widely regarded as a contentious process. It isn’t always, and it doesn’t have to be, but that’s the perception. And often, the reality. After all, if everything is smooth sailing and sunny skies, your marriage probably wouldn’t end.

But even if your divorce has the potential to turn hostile, as they often do, fear of such a conflict can’t get you fired. At least according to a recent ruling by the New Jersey Supreme Court.

A man named Robert Smith was fired from his job as the director of operations for the Millville Rescue Squad. The non-profit group provides rescue services and emergency medical transport. Smith had worked there in various capacities for 17 years.

Smith, who was married to a co-worker, had an affair with a volunteer. As you can imagine, this situation ended poorly, divorce proceedings ensued, and the couple terminated their marriage in 2006.

Fired For The Possibility Of An Ugly Divorce

Fearing a contentious, ugly divorce, Smith’s superiors worried it would negatively impact his work and the organization. Instead of waiting to see if that was indeed the case, they fired him under the guise of “corporate restructuring” and cited poor performance. This despite the fact that he’d been promoted multiple times over the years.

Smith struck back by filing a wrongful discrimination lawsuit. In 2008, he argued he was dismissed because of his divorce. He asserted he was the victim of prejudice based on his marital status.

Though that claim was found lacking, the court did unanimously decide he couldn’t be terminated because his superiors feared his divorce might turn combative and antagonistic.

In reality, the split was fairly amicable, and Smith claims to still have a good relationship with his ex. The court ruled he was protected by New Jersey laws that bar employers from imposing rules and conditions that have nothing to do with the job at hand.

“[D]oes not bar an employer from making a legitimate business decision to discipline or terminate an employee whose personal life decisions, such as a marital separation or divorce, have disrupted the workplace or hindered the ability of the employee or others to do their job. However, an employer may not assume, based on invidious stereotypes, that an employee will be disruptive or ineffective simply because of life decisions such as a marriage or divorce.”

Related Reading: What to Expect in Divorce Court

How An Ugly Divorce Can Get You Fired

So, you probably can’t get fired simply for getting a divorce. Even if it gets nasty, so long as it doesn’t drag down your work. If there’s a specific clause in your contract, perhaps you can, but that is a unique, unusual situation.

That said, an ugly divorce can still have an impact on your work life in a number of ways. You may not get fired outright, but if you’re not careful and things get out of control, it may negatively impact your employment.

Related Reading: Should I File for Divorce First?

What can you be fired for?

If Your Work Suffers: Divorce is an emotional, trying time. In many cases, it may be the most difficult, draining experience of your life.

Different people respond to this stress in different ways — some drink too much, others break down, while still more power through. If a heated, ugly divorce takes a toll on you, and your performance on the job takes a hit, that won’t reflect well.

If Absence Or Lateness Become Problems: Following along similar lines, if habitual tardiness or absence becomes an issue as a result of your ugly divorce, your employer will likely have something to say on the matter.

Appearing in court is one thing, and is protected by law. Outside of that, however, missing excessive amounts of work for personal reasons may present problems.

Be Careful What You Say On Social Media: As we said earlier, we’ve seen people be fired for what they say on Facebook, Twitter, and other platforms. If things get heated and nasty in the public realm, your employer may worry it casts a negative shadow on the company. Be careful of what you post.

A good rule of thumb is not to mention your divorce at all and give your soon-to-be-ex a wide berth. Especially if you can’t play nice. And don’t do any of this while on the clock, that much should be common sense.

Related Reading: Can Your Spouse Prevent You From Getting a Divorce?

What This Decision Means

Smith’s case was initially dismissed. The trial judge ruled he was fired because of the possibility a contentious divorce would diminish his work performance and didn’t consider marital-status discrimination.

By subsequently ruling as they did, however, the New Jersey Supreme Court effectively reversed that stance. In effect, they said since marital status is a protected class, this protection extends to people in “transition from one state to another.” In other words, much like you can’t be fired for getting married, you can’t be fired for ending a marriage.

Barring extreme circumstances, the simple act of divorce won’t get you fired. Even if it devolves into a nasty, vicious screaming match. So long as it doesn’t negatively impact your work performance.

Though it may not be a direct cause, however, if you let your personal conflicts from an ugly divorce bleed over into your professional life, it can have a distinct, substantial effect.

Related Reading: “My Ex Agreed To Pay Off Shared Debt Then Declared Bankruptcy.”