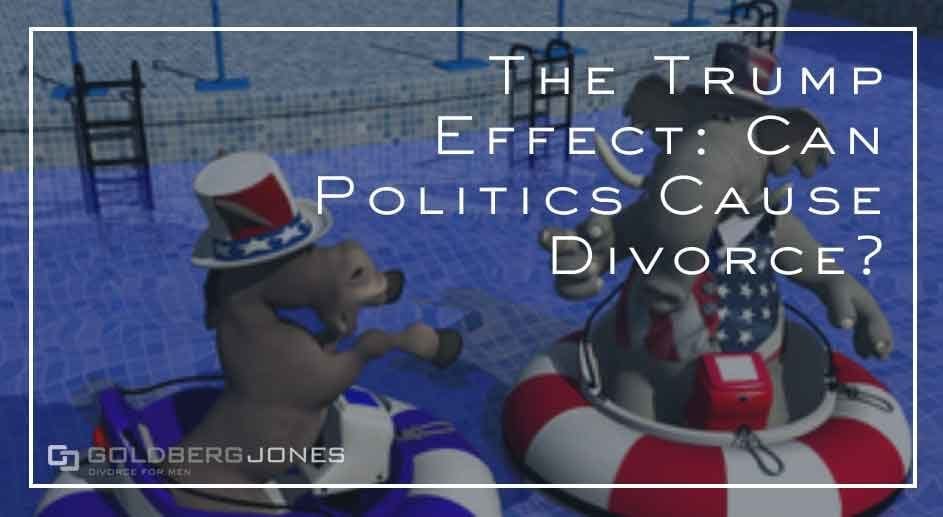 UPDATED: It’s taken many forms over the years, but the saying goes, never talk religion or politics in polite company. Etiquette manuals cite this maxim, and even Peanuts creator Charles Schulz had a version. Though his added the Great Pumpkin to the mix.

Regardless of the source, it’s sound advice. These are loaded topics that people feel strongly about one way or the other. Conversations of this nature often become heated and cause conflict. If you’re not looking to start a row, it’s best to leave them off the table.

It’s easy enough to avoid these topics in social settings or during a night out. But it’s not so simple in every situation. For instance, at home. What if you and your spouse have drastically different political beliefs? How often does politics cause divorce or negatively impact relationships? The truth is, it happens fairly often, increasingly so in the current political climate.

The 2020 Presidential election is shaping up to be one of, if not the most divisive in United States history. The mudslinging has already started and it’s not even fall yet. There’s a long way to go until November.

These rifts can be especially damaging when they occur within your own home. But just how often do politics and political differences end marriages?

Related Reading: 7 Things to Do Before Starting a Divorce

Read the Original Post About Politics and Divorce Below:

Whatever side of the aisle you fall on, President Donald Trump is a polarizing figure. People who love him, adore him; those who hate him, despise him. There’s not much middle ground to find.

The “Trump Effect,” as people have started calling it, is even manifesting itself in personal relationships. Families are at odds, friendships have ended, and it has a substantial impact.

One of the most highly publicized instances was 73-year-old retired California prison guard Gayle McCormick ending a marriage of 22 years because her husband voted for Trump. She said she felt “betrayed” and called it a “deal breaker.”

McCormick is far from alone. A poll of over 6000 people taken between December 2016 and January 2017 found that 16% of those who responded stopped talking to a friend or family member after the election. This extends to the world of social media as well. 17% of people said they blocked friends or family on the same grounds.

Related Reading: Can an Ugly Divorce Get Me Fired?

Differing political views can obviously impact a marriage or relationship. It can be Trump or it can be something entirely unrelated. In some instances, there’s a direct correlation where politics cause divorce. But what can you do if you and your spouse hold opposite views on important political topics?

As illustrated by the statistics, such disagreements kill many relationships. There are cases where politics cause divorce. Whether or not you and your spouse have the ability to work around this depends on the situation.

Some couples can compromise or figure a way to work around these opposing views. It may take a great deal of effort or even measures like counseling, but it’s often possible. One strategy is to focus on the values you do share rather than those you don’t.

People with different political stances can remain happily married. But not everyone. Some couples can figure a workaround on a short-term or temporary basis. However, this isn’t always a good base for a happy, healthy marriage. Even if two people can coexist, these disagreements may simmer beneath the surface and lead to resentment. Suppressing them may only do more damage.

At some point, if you and your spouse can’t find a way to live happily ever after, you may have to reevaluate your relationship. You may need to take a long, hard, honest look at your situation.

Ask yourself if you can live with a person who you disagree with in such profound ways. Only you know the answer for sure. Eventually, if the conflict continues, the negatives may start to outweigh the positives. This is just one way politics cause divorce and harm relationships.

Related Reading: How to Find the Best Divorce Lawyer