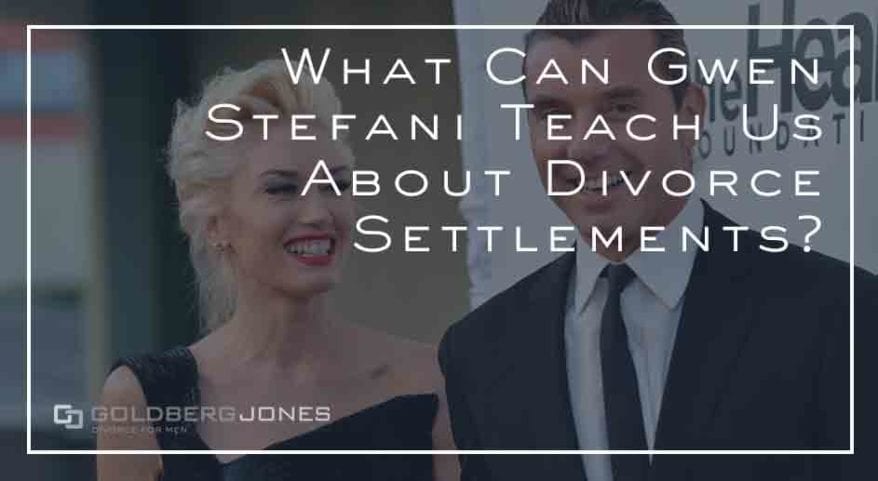 We look to celebrities for fashion inspiration, for movies, for music, for entertainment. They’re often trendsetters and influencers of culture. But should we also look to them for marital advice or for how to go approach divorce settlements?

While their situations are often quite different from our own—even if gossip magazines are fond of pointing out just how like us they really are—but when it comes to divorce, they often deal with many of the same issues we do.

Back in August, after almost 13 years of marriage, and more than 20 years as a couple, musicians Gwen Stefani and Gavin Rossdale divorced. TMZ reports that they have now reached what appears to be an amicable, equitable settlement in the process, and there are some interesting points to examine.

California is a community property state. As the name indicates, this means that, under the laws regulating divorce in the Golden State, debts and assets are viewed as belonging to both parties. In the case of the dissolution of marriage, they can be split down the middle between the two sides.

In this particular divorce, there was no prenuptial agreement, so, from a legal standpoint, Rossdale was entitled to keep half of any money he and Stefani may have earned, or any property jointly acquired, during the years of their marriage. He did, however, concede to take a smaller split than he may have been legally allowed.

The Bush frontman agreed to take less than half of the shared assets. Considering his now ex-wife’s lucrative music career, her fashion line, and other ventures, like her stint hosting NBC’s popular singing competition The Voice, he may have passed up quite a tidy sum. Then again, with his own successful musical endeavors and acting career, the 50-year-old Brit is probably doing just fine.

Division Of Property In Divorce Settlements

Though Rossdale could have pressed for an even split of their marital assets, he did not. But that doesn’t mean their resources weren’t divided, and much of their shared property was divvied up between the two.

For example, Stefani ceded any rights to their homes in Europe, of which there are four. Though she does retain full control of the couple’s two Los Angeles homes—because you need two houses in the same city—and they will sell their Beverly Hills residence and split the proceeds down the middle.

While California is a community property state, Stefani and Rossdale took an approach similar equitable distribution, which is used in states like Oregon, to split up their various assets. Equitable distribution is where a court, mediators, or the two sides decide on a fair dispersal of assets rather than a clean 50/50 break.

Though some of their business interests were in fact divided, they each primarily kept ahold of the things that were theirs before the wedding. For instance, both musicians retain their interest in their respective bands, No Doubt for Stefani and Bush for Rossdale.

Stefani also keeps 100% control over her successful fashion house, L.A.M.B., and her line of perfumes, Harajuku Lovers. Given how popular these brands are, had Rossdale pushed the issue, he likely could have walked away with a substantial amount of capital.

Though she stays in control of both of these companies, Stefani did agree to put 25% percent of the profits from L.A.M.B. into a trust for their kids.

The custody of children often becomes a heated point of contention in divorce. When guardianship of minors is involved, emotions can run high, tempers have a tendency to flare, and this can complicate what may already be a tricky process. These issues throw a monkey wrench in many separations, celebrity or otherwise.

In this case, the two rockers agreed to joint 50/50 physical and legal custody of their three sons—Kingston, 9, Zuma, 7, and Apollo, 2. Essentially they agreed to share the cost and duties of raising their kids and remain present in their lives an equal amount.

There was no child or spousal support asked for or awarded in the divorce settlement, though the two celebs did establish a communal expense account for the care of the kids, each kicking in $1 million.

For all the joking about how celebrities are just like everyone else, Gwen Stefani and Gavin Rossdale’s divorce is a very different situation than most of us will ever go through. They live a lavish lifestyle that the majority of us can’t even imagine, and they had far more resources to divide than most of us ever will.

Still, there are elements of this divorce that are similar to what you may be going through in your own case. They dealt with custody issues, child and spousal support, the ongoing care of their kids, property division, and more. In many ways, this is quite similar to a normal divorce, just on a grander scale than we’re used to.

This is also an illustration of how a divorce can transpire in an amicable fashion. They don’t always need to be heated, contentious affairs. There are probably hurt feelings and heightened emotions in play—Rossdale did, reportedly, have an extended affair with the couple’s nanny, after all.

Still, the two sides were able to work together for a resolution that was beneficial for everyone, especially their children, and where both walked away with what they needed.