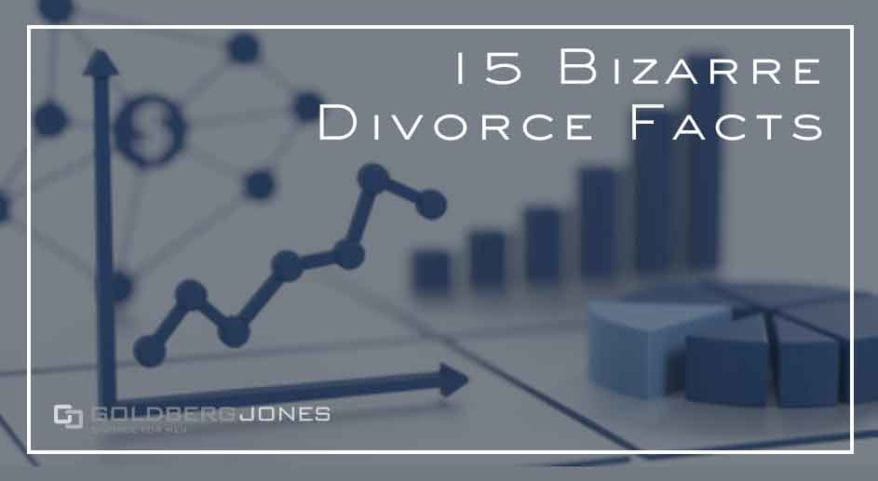 It’s easy to look at divorce facts and statistics floating around and be overwhelmed. With the oft-cited axiom that roughly half of all marriages end in divorce, things sound bleak. The whole process often feels awesome and ominous.

But there are so many more divorce facts than just a collection of out-of-context numbers. With that in mind, here are a handful of tidbits related to ending a marriage. Some are interesting divorce facts, some may prove useful, others are downright bizarre.

1. Put Down That Smartphone

To foster a sound, healthy marriage, maybe log off of social media now and again. According to reports, in 2011, one-third of divorce filings in the United States contained the word “Facebook.” This isn’t a purely American phenomenon, either. In 2014, nearly half of all Italian divorce proceedings cited the instant messaging app, WhatsApp. Most often, these turn out to be the way one spouse finds out about infidelity on the part of the other.

Broken down by region of the country, the

Jobs have a substantial impact on married life. A report examining the divorce rates in 449 careers found that agricultural, nuclear, and sales engineers rank among the occupations with the lowest divorce rates. Podiatrists, members of the clergy, and optometrists also have low numbers. These professions have 6.8%, 5.6%, and 4% divorce rates, respectively. Looking for a stable marriage, maybe hit up an optometry conference.

Dancers and choreographers represent the flip side of these numbers. The same report notes members of that profession face a sky-high 43.1% divorce rate. Rounding out the top three are bartenders at 38.4% and massage therapists at 38.2%. Casino workers, telephone operators, and nurses all follow hot on the heels of the leaders.

At the same time as your occupation correlates with divorce rates, how close you live to work also influences marital stability. A long commute may give you time to catch up on podcasts or check the news of the day. The trek may even seem worth it for access to career opportunities.

A Swedish study, however, found that people who commute at least 45-minutes to work have a 40% higher risk of divorce or separation than those who do not. This is especially true in the earlier stages of a marriage.

Going to the gym is a good idea in most cases. Especially as we get older, it’s important to look after our physical health. This is sound advice in an individual sense, but it may also enhance the health of our marriages.

Experts remark that when one spouse gains more than 20% of his or her body weight, it increases the likelihood of divorce. These may sound like a shallow divorce facts, but it can also indicate that one partner no longer cares or is less invested in the marriage.

These celebrations include a “divorce dress,” a buffet meal, and peak as the former bride and groom use a gavel to pound their wedding rings flat. Requests for this ceremony more than tripled as couples took the time to reexamine whether or not they were happy in the wake of the disaster.

When we refer to people flushing a marriage down a toilet, it’s usually metaphorical in nature. Well, in Japan’s Mantokuji Temple, things also get a bit more literal. Historically, the Buddhist temple was a haven for unhappy wives where women found legal refuge and divorce from their husbands.

Visitors wishing to cut ties write their desires on a piece of paper, which they then flush down a white toilet. (There’s a black toilet for those looking to reinforce bonds.) Not limited to bad marriages, visitors can pray to the toilet deity to sever ties to any negative aspect of their lives. And since the temple put up a sign, no one has mistaken it for a real lavatory.

Albert Einstein’s divorce cost him the cash award from his Nobel Prize. For all of his contributions to physics, Einstein may well be most famous for the world’s most known equation: E=MC2. One of his fellow students, Mileva Maric, the only woman in his physics class in college, helped him double check his numbers.

The pair fell in love, married, and had two children. When the relationship soured, he proposed a deal. Assuming he would eventually win a Nobel Prize, he offered Mileva the attached money if she agreed to divorce. She consented, and though it took until 1921, she eventually collected.

Of the 44 Presidents of the United States, only one has been divorced. Ronald Reagan, then still an actor, married his Brother Rat co-star, Jane Wyman, in 1940. The couple had two children and divorced in 1949. He subsequently married Nancy Davis in 1952.

Donald Trump has divorced twice, from Ivana Trump in 1990 and from Marla Maples in 1999, and married three times. He wed his current wife, soon-to-be First Lady Melania Trump, in 2004.

Whether as a member of the multi-platinum supergroup Genesis, a Grammy-winning solo artist, or an Oscar-winning songwriter, Phil Collins has remained one of the most popular musicians in the world since the 1970s.

He also may have asked his second wife, Jill Tavelman, for a divorce via fax machine. There is some back and forth on the matter, however. As recently as October 2016, Collins denied this, claiming the reports were based on false information. At the time, it made him a tabloid mainstay.

With the advent of technology and online guides, it’s easier than ever to get a divorce. But ending a marriage online is nothing. In Malaysia, it’s possible for a man to divorce his wife via text message. An Islamic country, a court ruled that under Sharia law, such a strategy is valid.

This sprang from a 2003 case where a man was granted a divorce after sending his wife a text message that reportedly read, “If you do not leave your parents’ house, you’ll be divorced.”

We all know that financial matters are stressful, but according to one recent study, arguing about money is the single biggest predictor of divorce. It exceeds even fights about sex, children, and family. These findings cut across the board, considering income, debt, and total worth.

Regardless of how much people make, these clashes also happen at all economic levels. For both men and women, these conflicts tend to be longer and harsher, leaving lasting scars. This leads to lower relationship satisfaction and an increased number of divorces.

As far as random divorce facts go, this is just the proverbial tip of the iceberg. Especially with easy access to the internet, countless divorce facts from around the globe will come to you. If nothing else, seeing how widespread and common ending a marriage is serves as a reminder that you’re not alone.