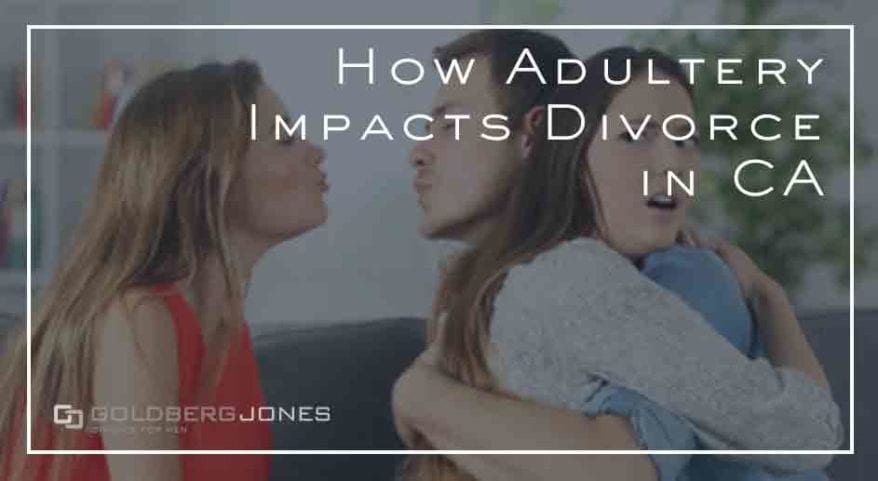 Adultery usually has a catastrophic impact on a marriage. It’s a betrayal of trust and a huge slap in the face. While divorce is rarely as simple as one thing, infidelity often irreparably damages a union.

Though it wields a destructive power like little else, the question remains of how much cheating impacts the actual divorce.

In many cases, it’s significantly less than people expect, and not always in the anticipated ways.

Like most others, California is a no-fault divorce state. What this means is fairly simple: From a legal standpoint, no one is to blame for a breakup. Neither side needs to prove the other was at fault.

All that needs to happen is for one spouse to declare a marriage “irretrievably broken,” with no hope of reconciliation. In short, if you want a divorce, meet the requirements (like actually being married in the first place), and follow the proper procedure, you get a divorce.

Even if adultery is the reason your marriage ends, in many divorces it winds up playing a smaller-than-expected part. It’s often almost entirely irrelevant in the larger process. The focus falls more on the desire for divorce than the reasons.

There are, however, situations where adultery does impact divorce proceedings. The scope and scale vary a great deal depending on the situation, but it can ultimately have a role in certain areas.

One area where adultery sometimes has an impact is when it comes to spousal support. It’s rare, but it does happen. Intended to provide financial assistance in the wake of separation, if you show that infidelity led to financial hardship, the court may award alimony payments. This is often difficult to show. However, if an affair directly impacts your economic status, you may have a case.

Over the course of an affair, or multiple affairs, perhaps your spouse accumulated significant credit card debts or drained joint saving accounts paying for gifts, dinners, hotel rooms, or similar expenses. That could affect support payments.

In cases like this, the court may take this into account and award spousal support to offset these.

In extreme circumstances, courts may even consider emotional distress. This is even more difficult to prove, however. But if adultery caused severe trauma, this may factor in. It does have to be serious.

Perhaps infidelity caused so much stress and strain it impacted your ability to hold a job. In that case, if you definitively show that is the source, the court may award spousal support.

Spousal support isn’t as formulaic as child support, and more than adultery, other elements factor into the decision. Financial need, the income of both spouses, the length of the marriage, job prospects and earning potential; all of these and more take precedence over cheating. Judges don’t usually use spousal support as a punishment for misdeeds like infidelity.

Child custody is another area where adultery may play a part. Again, in order for that to happen, you have to show that it had a very specific impact. Having an affair doesn’t automatically disqualify one parent or the other from receiving custody. If it negatively impacts parenting ability, however, then it often plays a role.

If infidelity directly led to poor parenting choices, the court can consider this.

More than just once or twice, you’ll likely have to show a continued pattern of neglect or detrimental behavior. This has to negatively hinder one spouse’s fitness as a parent.

And perhaps more importantly, you have to show that this is the case. Again, however, it’s often difficult to demonstrate how adultery hinders the ability to care for a child.

It’s also rare, but there are circumstances when adultery may influence the division of property in a divorce. California is a community property state, which means the court typically views assets and debts acquired during the marriage as the property of both spouses.

Courts don’t split assets as punishment for things like adultery. That’s not the purpose. The general idea for this phase of the process is for both parties to emerge on more or less equal footing and maintain a lifestyle similar to the one they enjoyed while married.

Similar to spousal support, if there’s a situation where an affair directly contributed to an undue financial burden, infidelity may rear its ugly head.

If your spouse emptied accounts buying lavish gifts or charged expensive hotels to a credit card, all in the course of an affair, the courts may account for that. If you have statements, bills, and other documents, you can present them as part of your argument. But as before, this is often difficult to definitively prove.

By now it’s probably clear that, in order for adultery to impact divorce, it must have had an actual, substantial effect. The judge isn’t there to punish infidelity, and divorce isn’t a punitive process. It’s not the court’s responsibility to make sure cheaters pay.

If adultery did impact your circumstances, and if you can show it, that fact may play a part. It can be hard to prove, and even then, the court may decide it isn’t relevant. As destructive as cheating often is to a marriage, the truth is that it doesn’t always have such a significant impact on divorce.