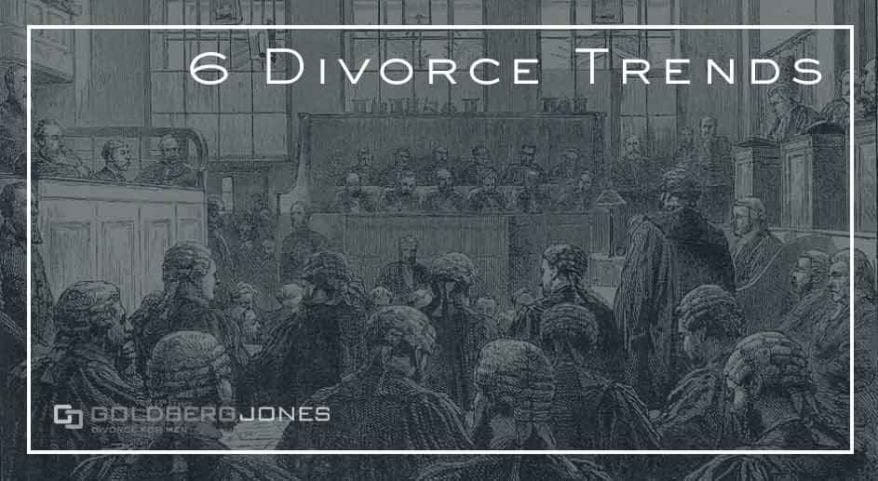 But how has divorce changed over the years? How is it changing as we speak? Some ways are drastic, while others are relatively minor. With that in mind, here are six current divorce trends to know about.

Related Reading: How do You Get Divorced in California?

1. The divorce rate is declining

It’s hard to discuss divorce without hearing the often-cited statistic half of all marriages end in divorce. A look at statistical data from the CDC reveals that divorce rates for Americans are decreasing. This has been the trend for years. It is, however, important to note that marriage rates have also declined over that time.

Related Reading: Why Does Divorce Take So Long?

2. Women initiate the majority of divorces

According to a survey conducted by the AARP, 66 percent of the women reported they initiated divorce. On the flip side, 41 percent of men said they asked to end the marriage. People often attribute this to changing gender roles. People also often cite increased social acceptance of divorce and economic independence as reasons.

Related Reading: Did My Wife File for Divorce?

3. Gray divorce on the rise

The divorce rate, in general, may be declining, but not for every demographic. One segment of the population continues to see an increase in divorce: Americans over the age of 50. So-called “gray divorce” has risen steadily. As people live longer, healthier lives, they’re less likely to remain in unhappy, unsatisfying mariages as they age.

Related Reading: What is Grey Divorce?

No two marriages are exactly the same. Accurately predicting which will last and which will end in divorce can be a bit of a crapshoot. However, there are ­factors that may increase the likelihood of a successful marriage.

Some of the factors include:

Couples who check off these boxes find themselves statistically less likely to divorce.

Where you live has a huge impact on divorce. Not only do laws vary from state to state, but it also impacts the likelihood of divorce. Nevada, West Virginia, and Arkansas have the highest divorce rate. Iowa, Illinois, and Massachusettes have the lowest.

This is less a trend and more a fact. And probably not a surprising one at that. Divorce has a significant impact on children. Kids raised in single-parent homes have a higher risk of facing emotional and financial challenges. These often leave long-lasting impacts.