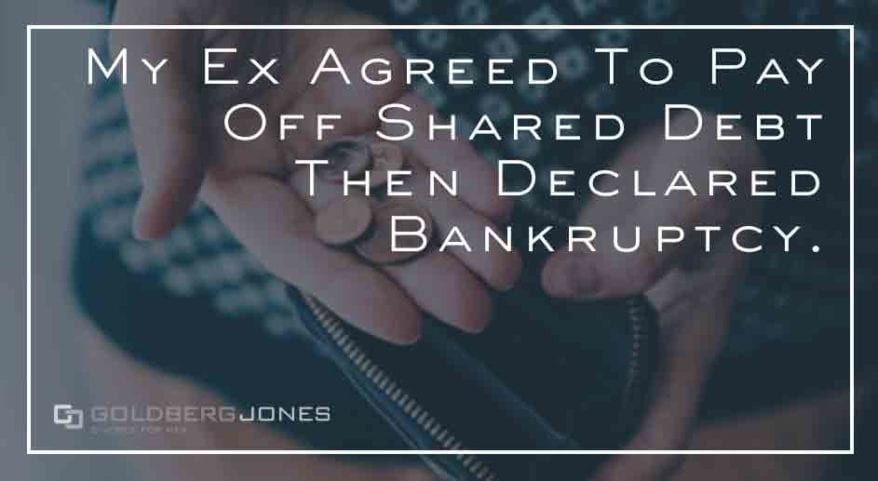 In divorce, the division of property often unfolds like a negotiation. In exchange for one thing, you or your spouse agree to another. Since debt is an unfortunate part of many of our lives, it also plays a big role in this bargaining. You can take on shared debt in exchange for, say, lower child support payments.

But what happens if your ex agrees to pay off a shared debt for reduced child support but then declares bankruptcy? Are you on the hook for that amount again? Can you modify the child support agreement? Do you know what a ‘hold harmless clause’ is? Because you should.

Our founding partner, Rick Jones, regularly appears on the Danny Bonaduce and Sarah Morning Show to answer family law questions from listeners. On a recent show, a caller asked exactly this.

“I recently got divorced, about a month ago. When they were deciding his child support, my ex got a reduction — a pretty significant deduction — because he was taking on the debt of the marriage. The minute the ink was dry he declared bankruptcy so he no longer has the debt and he doesn’t have to pay the child support.  Is there anything I can do about that?”

Rick: “Yeah, you actually have a recourse. The concept of fairness actually occasionally kicks-in in the world of law, and this is one of those circumstances. Where, in that divorce decree he was ordered to pay that debt.

“So what that does… that doesn’t change the relationship he had, or that you had with the creditor, that’s one of the concerns, that arguably, she’s still on the hook for some of this debt. But what it does do is it creates a financial obligation, a relationship between the two of you.

“So there’s a clause in your decree that’s called a “hold harmless clause,” which means, if you have to pay anything he was supposed to pay, you can bring it back to court.

In addition to that though, because he was supposed to pay this, something happened about her child support being somehow connected.  Which is rare I might add by the way. It does give her recourse to say, ‘hey, let’s adjust child support.'”

Danny: “What about his bankruptcy?”

Rick: “Well, somebody’s entitled to a bankruptcy. He can get rid of that obligation, that’s between him and the creditor.”

Danny: “But not between him and her?”

Danny: “So it still exists, even though he…? Very cool, I did not know that. Thanks.”