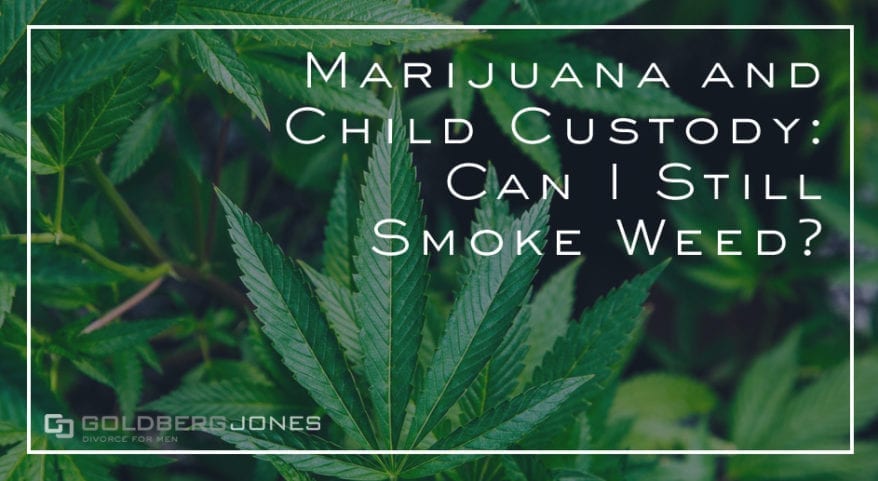 Marijuana has been legal in our neighbors to the north, Washington and Oregon, for a number of years now. Though medical use has been allowed for some time, recreational use was not. That all changed at the beginning of 2018, when Proposition 64—the Adult Use of Marijuana Act—a measure approved by California voters, took effect allowed for the purchase and sale for personal use.

Since it’s only been legal for a short time, the true scope and scale of these changes remain to be seen. From our perspective, as family law attorneys, we find one area especially interesting: how legal marijuana impacts child custody.

As a result of its legal status, there’s not a ton of concrete information about how cannabis use influences child custody cases. Especially this early in the game, it remains something of a grey area.

From a strictly legal, letter-of-the-law perspective, marijuana use parallels alcohol. Simple causal use shouldn’t have a negative impact on your custody claims. But, like with alcohol, if it becomes a problem, or potentially puts your children in harm’s way, it may become an issue.

In custody cases, the best interests of the child take precedence over everything else.

However, the reality is that marijuana and alcohol aren’t always treated the same way. With no set-in-stone rules and regulations, much remains open to interpretation.

Like it or not, there’s still a stigma attached to cannabis. It’s become much more common; with pot shops popping up all over the place, it’s a normal part of the landscape. They look like the professional businesses that they are. But that doesn’t always change the public’s mind.

Though California and many other states consider it legal, the federal government classifies marijuana as a Schedule 1 drug, like heroin or LSD.

The stereotype of the stoner, slumped on the couch, surrounded by a cloud of smoke, watching cartoons elbow-deep in a bag of Doritos, is tough to shake. Many people view drinking a beer around your kids much differently than smoking a joint around your kids. This also brings up issues of second-hand smoke similar to smoking cigarettes near children, but it’s similar for vaping, tinctures, and other delivery methods.

Basically, the reaction varies from one person to the next. Your social circle may not give cannabis use a second thought. Other people, however, may not hold the same views.

Child custody disputes often become stressful and combative, with each side looking for any advantage. If it gets that far, your ex may very well present the fact you use marijuana to paint you and your parenting ability in a negative light. Even if that’s not true, it’s something you may have to contend with.

Related Reading: I Pay Child Support, but My Ex Denies Visitation. Is that Legal?

As we’ve said, using recreational cannabis alone shouldn’t ruin your custody claims. It may well play a part, but it shouldn’t derail everything. Shouldn’t is the key word. That doesn’t mean it won’t factor into your situation at all. You do, however, have steps you can take to protect yourself, your kids, and your custody case.

The best way to help yourself is to be smart and use common sense:

Don’t be reckless. Taking these steps not only creates a safe environment for your kids, but also the appearance of one.

Again, alcohol consumption offers something of a roadmap. Having a beer or cocktail now and then probably won’t damage your case. But if it impairs your ability to care for your children, it’s going to cause waves. The same goes for cannabis use.

Substance abuse, regardless of the substance, will most likely come up in a child custody dispute. If you smoke with your kids in the room, if you get high and forget to pick them up after soccer practice, or if, god forbid, you light up and get behind the wheel–especially if your kids are in the car–that will come back on you. And it’s not a good look.

Recreational marijuana may be legal in California now. You may be able to buy it at the new pot shop in the strip mall down the way. But that doesn’t mean it won’t impact your custody case. It’s important to know the potential ramifications. All of them.

How much weight it carries likely varies from one case to the next and from judge to judge.

If you have questions about the impact of marijuana use on a custody case, it’s probably in your best interest to talk to an attorney. They can offer a realistic idea of what to expect.

But in the end, if you have serious concerns about legal marijuana and child custody, your best option is to take a break. Don’t give your ex any more ammunition to use against you than you have to.

Related Reading: Why You Need a Parenting Plan