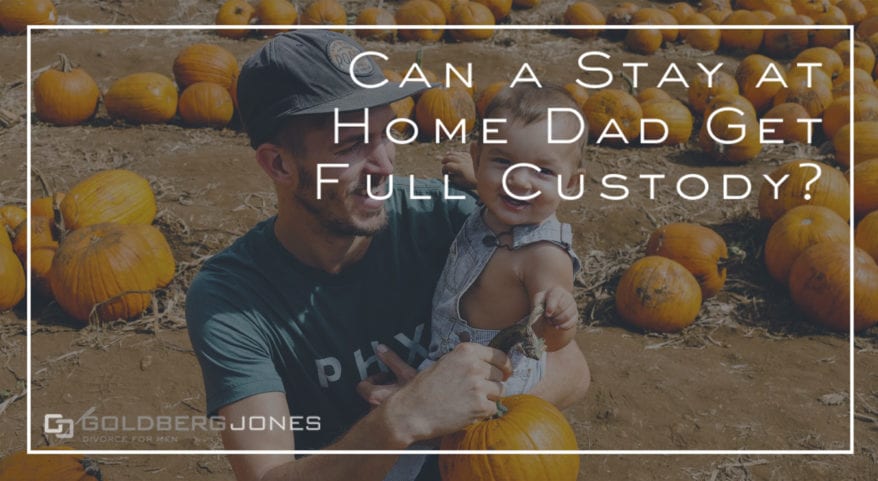 There’s a common perception that, when it comes to divorce–and especially custody–women have the upper hand. Because of social norms, established gender roles, and other factors there’s no room to get into here, it often plays out like that. However, as written, the laws are gender-neutral.

One big thing the court looks at when deciding where a child will live is which parent functions as the primary caregiver? This has a huge influence on their decision. In a traditional, Leave it to Beaver style family structure, the father goes to work while the mother stays home with the kids. In that case, the mother has generally filled the primary caregiver role.

But what if the conventional roles are reversed?

What if the father is the primary caregiver and the mother the main breadwinner? What chance does a stay at home dad have to get custody?

Rick Jones, one of our founding partners, regularly appears on the Danny Bonaduce and Sarah Morning Show, where he answers family law questions from listeners. One recent caller finds himself in this situation. And Rick had pretty good news for him.

Related Reading: Custody Modification: What if Your Kids Hate Living With Your Ex?

Listen to the Conversation Below:

Caller: “I’ve been married 19 years. Been with my wife for 21 years. We’re being cordial with each other, we’re not throwing pots and pans or knives and forks at each other, because we know we have to coexist. So the question is, a lot of the laws state that the woman will get ‘this’ in the divorce, and this and that because the man makes all the money. I’ve been reading up on a lot of it, but my situation is different.

“I’ve been the stay at home dad and she makes all the money. Snd she makes a substantial amount of money because of her business.”

Sarah: “Jason, I think we have news for you if you want to let Rick Jones answer your question. Is it about what to expect and will you get paid?”

Caller: “Yeah, exactly. What am I going to get out of this and how will it work?

Rick: “Well the first thing I want to correct for the listeners out there when Jason said he’s read the laws that said, ‘The woman gets this and the woman gets that.’ That’s actually not true. Understand this is going to be good news for you. The laws are actually written completely gender-neutral.

“Yes, it does talk about someone being the higher income earner. Yes, it does talk about whether somebody is already in the role of being a primary parenting function provider. With the way our culture is and continues to be to some extent, what that means, is that there is sort of a stereotype that many of our clients are in the position of having been the wage earner with a stay at home parent.

“So, [is your wife] going to have a shot at full custody? No, of course not. In your situation, the gender roles are completely reversed. So I don’t see any reason why you’re going into this with some sort of doubt or expectation.

“The reality is that the two of you have created a community for 19 years. Ultimately that business, just like her business, needs to get divided. You’ve got your community share. You may also have a temporary ability to receive some support. When I say temporary, we’re talking about spousal support, often called alimony, and in a 20-year marriage that maybe three, four, even five years of some financial support depending on the difference.

“And lastly, custody. Again, the most important thing, you have a leg up. You’ve already been in the role of primary parenting function provider. You’re asking the court not to do anything. The judge shows up and wants to have an easy day, and an easy day for them is to keep everything the way it’s been, which is [you] being a primary parent.”