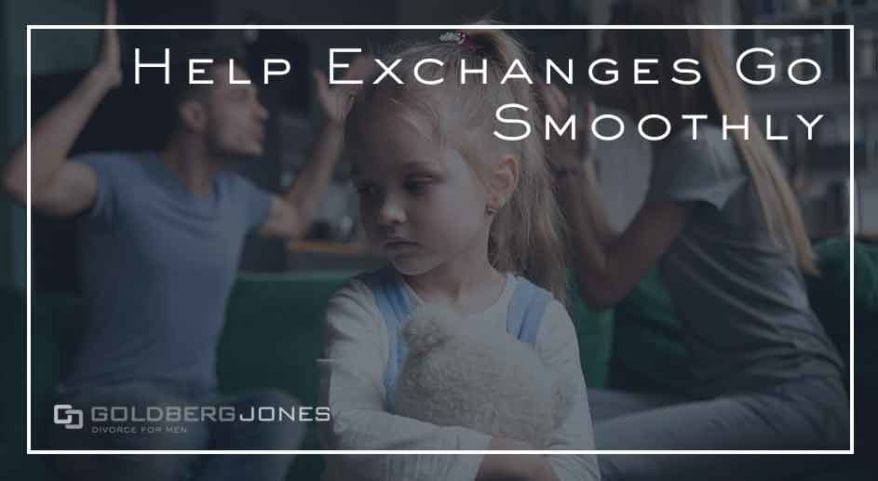 There are bound to be hurt feelings and leftover traces of hostility and resentment following a divorce. After all, if things were all sunshine and puppy dogs, the marriage probably wouldn’t be over. In many cases, exes never want to see one another again. And in some situations, that works just fine. When there are kids involved, however, that’s much easier said than done. Former spouses are going to come face to face during custody exchanges. That’s a fact of life to get used to.

How often this happens depends on the custody agreement, parenting plan, and level of visitation. It may be a couple of times a week, once a month, or around major holidays, but it’s likely going to be a repeating event.

In the best of times, even if both parents can be civil, custody exchanges will probably still be a little awkward. In less amicable scenarios, prepare for outward hostility that resembles the opening scene in Saving Private Ryan. Pack a helmet and prepare to duck.

In more combative circumstances, it helps to have a strategy in place to keep things civil. That’s easier on everyone, especially the kids. There are ways to cut down the amount of face time and limit the friction. It may never be easy or ideal, but it helps with stress level and peace of mind, for both the parents and the children—no kid wants to watch mom and dad fight.

1. Custody Exchanges At The Babysitter’s

In contentious situations, the more you see your ex, the more potential there is for friction and conflict. Sometimes it’s simply best not to see each other if you can avoid it. There are practical ways to circumvent this. One common approach is to make custody exchanges at a babysitter’s house or at daycare.

One parent drops the kids off and the other parent picks them up. If you schedule it right, the two of you may almost never come face-to-face. Because there are other people involved, you may encounter scheduling hurdles. Clear communication about who is picking up the kids and when is key. But once you iron out the kinks, this strategy helps limit contact and potential fights.

Similar to using daycare to facilitate custody exchanges, you can use your child’s education to the same end. Again, one parent drops the kids off at school in the morning while the other picks them up after. This has the desired effect of not having to see your ex more than is absolutely necessary. It can be useful in situations where parents are prone to fighting.

Like with the child care, you’ll need to arrange this with school administrators. Schools like to know they’re handing kids over to right people. But if there is clear communication between all the involved parties, it’s possible to make these arrangements work.

Many people want to avoid causing a scene in public. If you and your ex can’t handle custody exchanges without fighting, consider meeting in a public place. Choose a neutral spot where neither parent is likely to start a ruckus. If such a place exists. In some situations, nowhere is off limits, but being exposed often encourages both parties to be on their best behavior.

Where depends a great deal on the people involved. Pick a centrally located park. The mall, a restaurant, or a coffee shop where you know the regulars are all options. Extreme cases may call for supervised visitation centers or even a police station. Then again, if you just kind of rub each other the wrong way from time to time, a supermarket parking lot may work fine.

While people are reluctant to fight in public, they’re also often hesitant to start trouble in front of friends or acquaintances. One strategy that can smooth over problematic custody exchanges is bringing along a third party. A mutual friend or even authority figure can help keep the peace, especially if it’s someone who knows both parents.

If there are individuals both of you maintain a relationship with, that might be the ideal fit. This approach often serves to calm down heated emotions. And if things do escalate, having a witness never hurts.

If you do go this route, it’s important to give some thought to who you bring along. If you have a new spouse or significant other, consider the ramifications of their presence. Is that going to touch on a sore spot and ignite lingering resentment? In some situations, it might be best to ride solo instead of risking a potential fight.

Visitation, overnights, and custody exchanges often become logistical tangles. With football games, school plays, robot camp, and the many other activities children participate in, scheduling gets complicated. Pulling it off requires regular communication. If there are problems in this area, conflict often arises. When it involved kids, some level of contact must exist. Fortunately, there are alternative means of communication.

You may have mutual friends or family members willing to serve as go-betweens. Though it tends to get expensive fast, enlisting a lawyer or mediator is another potential strategy.

Thanks to modern technology, you have more outlets than ever before. If you can’t talk on the phone or in-person, email, texting, instant messaging, and other online options exist. Websites like Our Family Wizard provide shared scheduling services and online tools for co-parenting. There are even numerous smartphone apps for tracking parenting schedules and children’s activities. 6.

6. Prepare For Custody Exchanges Ahead Of Time

Preparation in advance of custody exchanges is key. The more prepared you are, the faster and smoother they’ll go. Before your ex picks up the kids, take the time to gather everything they need for this particular stay. Whether it’s a quick overnight or a two-week vacation, make sure to gather the essentials.

Did you pack all of the regular medications they take? Do they have all the school books they need to get their homework done? That report on the solar system isn’t going to write itself. If your daughter has a baseball game, pack the mitt and cleats. If your son can’t sleep without his special stuffed zebra, it needs to make the trip. Knowing you have everything set reduces the amount of time you have to interact with someone you’d rather not see.

Think about what the kids can’t live without and send it with them. Otherwise, you risk a middle-of-the-night call or visit from your ex. If the goal is to limit the amount of contact, that defeats the purpose, doesn’t it?

After a divorce, it may be quite some time before you want to see your ex again, if ever. But when you have kids, that’s not really an option. Custody exchanges can be tough, but it’s something you have to deal with.

For the sake of the kids, for their well-being—as well as your own—it’s important to try to make these encounters as smooth and painless as possible. Have a plan, be efficient, and keep your seething emotions in check for a few minutes. Hopefully, that’s all you’ll need. Taking steps to limit conflict in a custody exchange is healthier for everyone involved.