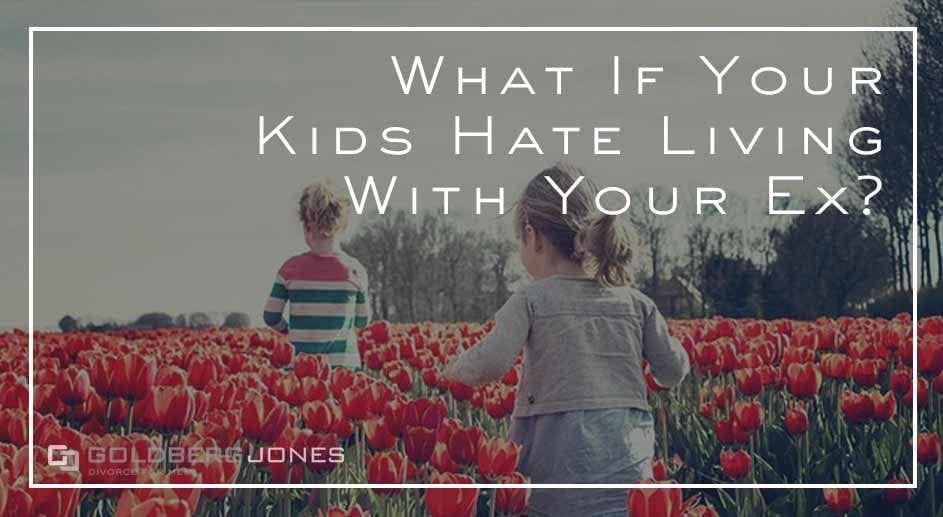 UPDATED: Child custody battles during divorce often become heated and contentious. Afterward, tensions and ill feelings can continue to fester. It’s bad enough when this just exists between parents, but what about when it involves the kids? What if your child hates living with your ex? What can you do? Is there a way to modify a child custody arrangement?

What If They Don’t Get Along?

We all know that parents aren’t always the kids’ favorite. Mothers and fathers have the job of being disciplinarians and keeping them safe. It’s not always glamorous and fun. There are bound to be clashes as the custodial parent enforces the rules while the other gets to be the “fun parent.”

Kids and parents not always getting along is about as normal as normal gets. We’re talking about more extreme situations. Where all they do is fight, it’s not healthy, and possibly even detrimental to your child. If your son or daughter truly hates living with your ex after divorce, what can you do? Can you modify child custody arrangements?

When it comes to ruling on child custody cases, the court weighs many things. The overwhelming factor they consider is the best interest of the child in question. In simple terms, that means exactly what it sounds like: where will the child be happiest and safest?

More than personal preference or parental convenience, the court looks at best interests when determining child custody. In a strictly legal sense, mothers and fathers have equal claim. It doesn’t always work out like this in practice, but that’s the way it is in a letter-of-the-law sense.

There are four types of child custody in California:

In most cases, parenting plans look like a combination of these types of child custody. It’s rare for the courts to award true sole custody. And joint custody works best when parents live in close proximity to one another, but not necessarily other situations.

How to Modify Child Custody

Once the courts make a custody and visitation order, it’s difficult to modify. That doesn’t mean it’s impossible, just that it often takes a great deal of time, effort, and potentially money.

The easiest, most convenient way to modify a child custody order is when both parents agree and are on the same page.

Over time, needs, relationships, and situations change, and you may want a child custody modification to fit the new circumstances. If your child truly hates living with your ex, and your ex agrees or realizes it’s no longer in the child’s best interest, it’s possible to renegotiate.

When parents agree, modifying the custody order is relatively simple. You fill out and sign a few forms and the court reviews your submission. If everything is in order and beneficial for the children, a judge will sign off on the changes. This is, of course, a best-case scenario.

It’s when parents disagree that things get more complicated. If the parents can’t agree to changes on their own, one must file a request with the court asking for a modification of the established child custody and visitation order. Once filed, it’s possible to work with a mediator to create a new arrangement. If not, you may have to go to court to state your case.

When and Why To Modify Child Custody Orders

As far as timing goes, you can seek to modify child custody orders at any time. However, the parent who seeks to alter the arrangement must provide justification. In most cases, this requires the petitioning parent to prove a significant change in circumstances since the original order went into effect. The court views consistency and stability as key factors in a child’s life. As a result, you’ll also have to demonstrate how modifying the custody order represents the child’s best interests.

A “change in circumstances” can mean many things. One parent losing a job, facing a dramatic increase or decrease in income, or an altered work schedule are all common reasons. Relocation may warrant a child custody modification. A parent remarrying or having children with a new spouse often represents a change in circumstances. If the custodial parent shows a pattern of irresponsibility, a judge may also account for that.

Related Reading: We Never Married, Do I Still Have Parental Rights?

The courts don’t generally consider a child’s preference when it comes to child custody modification.

In certain situations, however, courts may take a child’s preference into account. If they’re old enough to articulate their reasons, it’s possible.

If your child hates living with your ex to a degree where it becomes detrimental. The older the child is, the more likely they are to influence the court’s judgment, but it still has to TRULY be in their best interests.

It must be more substantial and concrete than that they want to live with one parent over the other.

But when it comes to a child testifying in family court cases, there are also regulations. Rule 5.250 of the California Rules of Court, lays out the guidelines. There is no specific age, and whether or not to allow such testimony varies from case-to-case and depends on the individual judge.

If a child wants to testify, the court must balance their well-being with the benefits to the case. The rule establishes guidelines about how to protect a child’s best interests, how the court receives the testimony, responsibilities of court-appointed adults, and more.

Related: What Do You Do If Your Teen Wants to Move In With Your Ex?